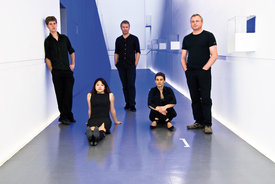 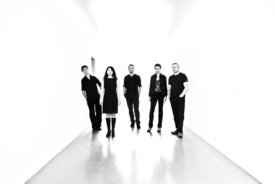 Violinist and composer Bernie Mallinger and accordion player and bandoneon virtuoso Klaus Paier should have crossed each other’s paths much earlier. “We come from the same Austrian valley”, says Mallinger. But it took until 2000 before they finally met at a workshop. During the next year they worked together for the first time, when Mallinger put together a string quartet for Paier’s CD-project “Movimiento” - which, by the way, was nominated for the “Amadeus”, the most important Austrian music-award.

After some personnel changes Mallinger’s group, the now well-known radio.string.quartet.vienna, made their debut one and a half year ago for ACT with Celebrating The Mahavishnu Orchestra (ACT 9462-2). And in what a way: For long you didn't hear the jazz criticism sounding in such an enthusiastic applause. The setting about John McLaughlin's legendary originals was revolutionary: An ingenious overturning of the usual 'Let's-Do-It-In-A-Jazzy-Way' of classical music was to be heard here. Jazz songs turned into a complete new outfit full of precision and depth, without losing any of its swing.

A completely new kind of string quartet was born; one that revealed a revolutionary way of playing and a unique world of sound. The rocking cello of Asja Valcic, lascivious viola from Cynthia Liao and the violins of Bernie Mallinger and Johannes Dickbauer enjoy the full range of dynamic and percussive possibilities and timbres. On Radiotree (ACT 9473-2) the quartet transcribes this concept with the cooperation of Klaus Paier.

“All the work, even the six pieces written by Klaus Paier himself, are specifically written for a quintet, not for accordion plus quartet”, as Mallinger explains. The group enjoys equal rights to the music, allowing for the unique pluralism as showcased in the Mahavishnu Project. Even if the path here turns back to Europe in a certain extend and from the four string instrument players' point of view the field of classical music comes closer in touch. Like in Paier's forceful opener "FlyUp" or in his programmatic "Musical Journey", where European music tradition has a strong connection with blues- and jazzcolored passages.

Besides that the album shows reverence to a legend of jazz-rock: three titles are written by Joe Zawinul, surely the most famous Austrian jazz musician, who tragically passed away in 2007. And once again, the creativity is surprising: Unexpectedly cool and flowing, the five musicians pay obvious homage to their energetic countryman. "In A Silent Way" is arranged in an almost classical way by Johannes Dickbauer, "Cannonball" expresses a meditative side in between dynamic explosions, and "A Remark You Made" is condensed into a bluesy melody by Klaus Paier.

One more farewell goes to Austrian vibraphonist and composer Werner Pirchner who died in 2001, in form of the heart-moving "Hosent’raga". A pioneer of the borderline between classical, jazz and world music, he was a natural and ideal common source of inspiration for this string quartet, which reclaims the territory between different kinds of jazz music with technical brilliance, creative power and compositional finesse. A quartet that - in very short period of time - made a couple of twigs and flower-buds grow out of a stem, as can be recognized in the actual teamwork with the Swedish guitar player and ACT artist Ulf Wakenius on his album Love Is Real (ACT 9459-2).

These ramifications, which lead apart while still being connected and interacting, are mirrored perfectly in an installation of the American artist Nathan Carter. This piece of art was discovered by ACT boss Siggi Loch shortly before the recording session. Funnily enough it was called 'Radiotree': Not only the album title was found rapidly that way, the highly symbolic work of Carter now decorates the cover of the album – which adds pride and joy to the whole team.