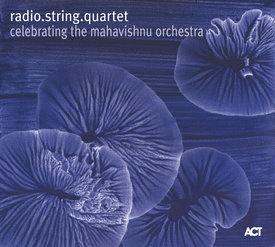 "When I was first given the demo CD of the recordings of the compositions I wrote for the "Mahavishnu Orchestra" performed by the radio.string.quartet.vienna, I imagined something of dubious quality.
Remember, these compositions were written for an electric jazz-fusion group 34 - 35 years ago, and while the 2nd version of Mahavishnu Orchestra had a string quartet within the group, the drums, bass and electric guitar were always there and very present.
From the first note I was struck by the way this group had 'appropriated' my music and made it their very own. They even got the atmosphere which was present all those years ago. The other aspect that touched me deeply was the importance they attach to improvisation, and they do improvise!
The quartet is also not without humour: just listen to that version of "Celestial Terrestrial Commuters"...
This is no ordinary string quartet. The love of, and the dedication they have to their respective instruments is marvellous, and the fact that they have taken what was electric jazz-fusion music, fused it with their training in 'classical' music, and conserved the 'electric' atmosphere is outstanding.
Throughout the listening of this recording, the radio.string.quartet.vienna brought me back to the wonderful days of the Mahavishnu Orchestras with true enjoyment. Thank you!

"The biggest surprise of the 2006 Berlin Jazz Festival came from Austria, and it was a big festival, comprising a grand total of 32 events. The Viennese conceptualists go to the very limits of the dynamic range, the colour palette and demonstrate a profusion of nuance that imparts breadth and spirituality on the rough and energetic originals”, says the Süddeutsche Zeitung about the radio.string.quartet.vienna, who presented their project celebrating the mahavishnu orchestra to an enthusiastic audience last autumn in Berlin.

“moviemiento goes radio”. Everything began in the year 2000, when Austrian composer/accordionist Klaus Paier asked Bernie Mallinger to put together a string quartet for his CD “Moviemiento”. The result: The CD is nominated for the “Amadeus Award” and the “moviemento string quartet” develops a vigorous life of its own. Over the course of several musical projects and some personnel changes, it turns into the “radio.string.quartet.vienna” in today’s line-up. “The ‘radio’ bit of the name stands for contemporary music, musical diversity and also entertainment. Also the name just felt right” (Asja Valcic).

The Sound of Mahavishnu. The arrangements of John McLaughlin’s 1970’s compositions touch a nerve with many former Mahavishnu-fans. Others doubt that a classical string quartet can handle the sheer energy level of the original “Mahavishnu-Orchestra”. However, John McLaughlin himself begs to differ: In a complete endorsement of the result and the quality of the performance of the radio.string.quartet.vienna, he offers to write the liner notes himself.

Another factor adding interest to celebrating the mahavishnu orchestra, can be found in the wildly differing biographies of the four musicians themselves:

Bernie Mallinger (a freelancer on the Austrian music scene since 1997, an active band-leader, composer, arranger, in demand side-man and teacher): “I was already a fan of the Mahavishnu Orchestra as a student. Being a fiddle player myself, I was fascinated by the way McLaughlin integrated the instrument into a normal jazz-rock line-up. He opened up horizons for me in a number of different ways, by combining different styles and sounds in a way that hardly anyone has achieved, either before or after him. From my point of view, the melodic, harmonic and rhythmic variety in this music makes it uniquely suitable for treatment by a string quartet. With my arrangements I never once tried to emulate the sound of the original fusion band. Rather, I bring out the structure of the compositions and show them in a new light.”

Asja Valcic (graduated as a classical cellist in Zagreb aged 18, has been touring since then as a member of international orchestras and a highly sought-after soloist): "I have much more freedom here than in classical music. Anything that is seen as unwanted noise, scraping, whistling or squealing in classical music can become a musical event in our music. We have consciously utilized these effects on the new album. The result is that the four individual instruments often merge into a completely new sound entirely without the use of electronic effects.

Johannes Dickbauer (following his classical studies in Salzburg and Vienna, he is currently adding the finishing touches at the Curtis Institute of Music in Philadelphia). An aptitude for jazz runs in the family: “My uncle Klaus (Vienna Art Orchestra, Saxofour) was definitely a role model as I started to improvise. The whole thing began as a hobby, but I am finding it more and more fascinating to bring the different sounds and timbres of the violin to jazz music.”

Cynthia Liao (from Taipei, has adopted Vienna as her new home-town). The temperamental violist was principle viola in numerous international orchestras and opera houses before she discovered her affection for the radio.string.quartet.vienna. She brings humour and charm to her role of “communicating between the registers”: “This music needs a tremendous energy on stage. This is something that creates a constant challenge for us, and makes working together an exciting experience on the borderlines of styles and cultures.”

A welcome relief from the yearlong Mozart-marathon: Vienna, the “European capital of music”, is finally transmitting a new and vital heartbeat: The radio.string.quartet.vienna keeps a rich tradition alive – in a refreshingly unconventional way.