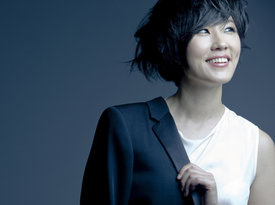 At Youn Sun Nah’s 2009 debut in Munich’s Unterfahrt jazz club, the audience went against the usual customs and arose for a standing ovation during the interval, not even waiting for the concert to finish. Germany’s Süddeutsche Zeitung called her the “discovery of the season” and wrote, “there has not been something so brilliant, interesting and virtuosic in jazz singing for a long time.” She won the Audience Prize in the BMW Welt Jazz Awards as well as the hearts of Germany’s jazz fans on her extensive JazzToday tour. Rarely has a singer taken Germany so by storm as the Korean artist Youn Sun Nah has with her ACT debut “Voyage”.

“Voyage“ made it into the French top ten of the jazz charts (France is her second home) and won the coveted “CHOC” as CD of the month (Jazzman). What the Koreans and the French have already known for a long time can now also be witnessed here, as it can worldwide. In Youn Sun Nah, someone with star quality has stepped onto the music scene, someone who is able to forge bridges in a truly unique way. The bridge between Asia and Europe for example, or between jazz, chanson and pop; between the highest technical precision and extreme musical freedom, between minimalism and exuberance and the bridge between the familiar and the unfamiliar.

With her new album “Same Girl” Youn Sun Nah is still on a musical voyage, exploring and experimenting with different musical styles and genres. Again the song material is very diverse, but she is still the same girl the audience has come to know and love, surprising the listener with songs that have been interpreted in highly individual and distinctive ways, and which break free from the usual stylistic constraints. “I didn’t want to be confined to a particular repertoire but reflect all possible moments of my life,” she explains. “That’s why I think the album is atmospherically much more diverse than “Voyage” and, in certain respects, it has more depth and reflects even more aspects of my personality.”

“My Favorite Things” opens the album. Written by Oscar Hammerstein and Richard Rodgers, it represents the “Great American songbook” in a previously unheard way, as Youn Sun Nah performs the song, exactly like Randy Newman’s “Same Girl”, accompanied only by herself on the kalimba, like an Asiatic meditation monologue. Nah’s own composition “Pancake”, which she thought of whilst waiting to perform and feeling hungry and which was composed as a vehicle for her musicians, sounds like a humorous version or perhaps even a rhythmic antithesis of “Favorite Things”. A Korean folk song (“Kangwondo Arirang”) and an energy driven composition by Ulf Wakenius (“Breakfast In Baghdad”) also serve to demonstrate her almost unlimited possibilities of vocal expression, which range from precise onomatopoeic unison sung with an instrument to expressive explosions and delicate, filigree phrased pianissimo. With “Same Girl”, Sergio Mendes‘ “Song of No Regrets”, Philippe Sarde’s “La Chanson d’Helene” and not least “Enter Sandman“ by the heavy metal band Metallica, which is reduced to its lyrical content, does she subject completely different regions of pop music to her personality.

Yet Youn Sun Nah offers not only totally new interpretations of the works of the best and most famous songwriters – her album also features genuine rarities. The bluesy “Moondog”, for example, stems from British drummer Terry Cox who was a member of folkrock bands such as The Pentangle and also played drums for David Bowie, Elton John, and Charles Aznavour. She also makes sure American folk singer Jackson C. Frank, who died prematurely in 1999, isn’t forgotten. Nah recalls his brilliant talent, destroyed by illness and psychological problems and documented on only one album, into our consciousness with “My Name Is Carnival”. To finish, Youn Sun Nah fulfils a long harboured wish with a cover of Philippe Sarde’s “La Chanson d’Hélène”. She did after all study French literature in Korea before her musical career and in 1995 went to Paris to become a chanson singer. In this way she treads heartrendingly in the footsteps of Romy Schneider who sang it in the original with Michel Piccoli as narrator. His role is assumed by French multi-talent Roland Brival, a musician, singer, painter and writer from Martinique. “His producer of many years introduced him to me and when I heard his voice I immediately knew that his sound would be an interesting contrast to my voice,” says Youn Sun Nah.

“Never change a winning team” could also be the motto of “Same Girl”. Once again, she is accompanied by Lars Danielsson on the bass, Xavier Desandre-Navarre on percussion and particularly Ulf Wakenius, her fixed partner in live performances, on the guitar – a true all star team.

Youn Sun Nah’s new album embraces eleven fascinating song interpretations of a very special kind, her distinctive voice building the framework for her multi-faceted musical tastes. Styles and genres may change from tune to tune, but it is always the same girl you are listening to: Youn Sun Nah. Truly unique