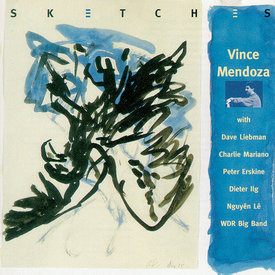 SKETCHES: For a man of 33, Vince Mendoza has packed an extraordinary amount of compositional, arranging and playing experience into his career - reflecting the unremitting endeavour that characterizes a musician always seeking to broaden his vision and to equip himself with the maximum resources to express his musical ideas.

His signal contribution to the highly successful Jazzpana album, released by ACT last year and on which he collaborated with Arif Mardin, earned him a Grammy nomination for his arranging skills. He now follows up with what he describes as his most ambitious musical project to date - a CD which combines "Sketches", the remarkable eight-part work commissioned by the West Deutscher Rundfunk and given its world premiere at the 1993 Berlin Jazz Festival, with an imaginative arrangement of Maurice Ravel’s haunting, immortal "Pavane Pour Une Infante DÈfunte" - one of Mendoza’s favourite impressionist pieces.

To perform the music, Mendoza had at his disposal one of the most impressive and widely experienced jazz ensembles in Europe - the WDR Big Band, which has garnered some well-merited accolades from the eminent jazz writers whose arrangements it has performed in recent years, including John Clayton Jr., Bob Mintzer, Clare Fischer, Rob McConnell, Manny Albam, Bill Holman and Bob Brookmeyer. And as main soloists, Mendoza called upon his longtime associate, Peter Erskine on drums, Dieter Ilg, one of Germany’s leading bassists, the brilliant Dave Liebman on soprano saxophone, the remarkable, Paris-based, Vietnamese guitarist, Nguyen Le, and, to share the solo spotlight with Liebman on "Pavane", the indefatigable Charlie Mariano on alto saxophone.

And, in Vince Mendoza’s own words, "I couldn’t have asked for more dedicated, more perceptive or more accomplished interpreters."

The CD "Sketches" is a major milestone in Mendoza’s composing and arranging career. Jazz author and critic Mike Hennessey has described the music as representing "state of the art arranging" and adds that it "incontrovertibly confirms Vince Mendoza’s status as one of the most creative and original writers on the contemporary jazz scene."

Born into a very musical family in Norwalk, Connecticut in 1961, Mendoza took up piano and guitar at the age of six and moved on to trumpet in high school. It was while attending Ohio State University that he began studying classical and jazz composition. He also began playing bass and drums - and any other instrument that took his fancy - gaining an insight into their range and tonal characteristics which, he says, helped him considerably with composing and arranging.

After leaving university, Mendoza moved to the West Coast and began freelancing as a composer of film and television music. He became a teaching assistant at the University of Southern California in 1983 and, two years later, began an association with drummer Peter Erskine which led to contact with musicians like John Abercrombie, Peter Gordon, Marc Johnson, Joe Lovano, Bob Mintzer and John Scofield.

Together with  Peter Erskine and trumpeter Marvin Stamm, Mendoza put assembled a big band of New York musicians to record a demo album of his music which was eventually released by a Japanese company in 1985. But Mendoza’s first really signficant recording was the World Pacific album "Start Here", released at the end of 1990 and featuring Ralph Towner, John Scofield, Joe Lovano and Peter Erskine.

"Expect big things from this prolific 29-year-old composer in the future," said the press release that accompanied the record. And time has proved that the prophecy was not just another piece of "promo-speak". Mendoza has since worked prolifically and impressively on recordings by Al DiMeola, the GRP All Star Big Band, Ute Lemper, Charlie Haden, Michael Brecker, Gary Burton & Pat Metheny and the Yellowjackets, among others. He has had compositions commissioned from Finland’s Espoo Big Band, from the American Conservatory Theatre in San Francisco, from the Berklee School, the International Electronic Music Festival and, of course, the West Deutscher Rundfunk. He was voted top composer and arranger in the Japanese Swing Journal in 1991, was awarded the John Green Compositional Prize, given a special award by ASCAP, the American authors’ society, and received a composition award from the University of Southern California.

Fernando Gonzalez in the Boston Globe has described Vince Mendoza’s writing as "complex but unpretentious" and notes that "at times it’s hard to tell the improvised from the written parts" - a characteristic which is very much present in "Sketches". And in a portrait published in Jazziz, Mendoza is commended for his ability to invest his music with "a sense of wonder" and described as a man who takes very seriously the lost art of the composer-arranger."In a very real sense," the article continues, "Mendoza devises the road maps over which the players express their respective gifts."And we couldn’t put it better than that. It’s an observation very much borne out by Vince Mendoza’s outstanding new album, "Sketches".