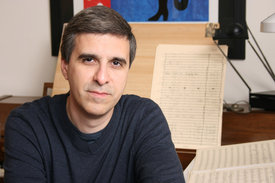 In jazz, the colour blue sometimes conveys red threads. And it is no accident that this CD opens with music from a classic jazz album whose title puts its cards on the table: “Kind of Blue”, the most successful jazz album of all time. “All Blues” lets us literally dive into the blue sea of melancholy. When you combine blue and sounds, the blues emerges once again.

The idea of Blauklang (ACT 9465-2) goes back to a painting by the famous German artist Ernst Wilhelm Nay (1902-1968), part of the ACT ART COLLECTION of Siggi Loch. In close cooperation with Bernd Hoffmann of the WDR (West German Radio) the idea of this project became reality. The name of the painting, “Blauklang” (“Bluesound”), already refers to the synaesthetic relationship between music and fine art. Grounded in the impact of colour, Nay’s abstract works now have taken on board a real “tone painter”, Vince Mendoza. Mixtures of tonal colours and coloured tones that overlay a variety of harmonic and melodic voices shape a large part of his compositions. Mendoza rules over this sovereign play of light and shadow, brightness and darkness. The album Sketches (ACT 9215-2), which he recorded with the WDR Big Band, already encapsulates an aspect of Mendoza’s work methods. Again and again he is stirred into assembling sketches into a musical arc of images. Compositions as suites – and he is as much enamoured by the details as he treasures large arcing structures.

Once again Mendoza is able to find the balance between aspirations and expectations. His ability to satisfy the sophisticated listener with a popular first touch has made Mendoza one of the most sought-after arrangers and a giant in both jazz and pop (Björk, Sheryl Crow, Joni Mitchell, Ute Lemper, Elvis Costello, Dianne Reeves, the Yellowjackets, Michael and Randy Brecker, Jens Winther, Joe Zawinul). The composer-arranger, who experienced his breakthrough with the Jazzpaña project (ACT 9212-2), works with some of the most prestigious musical organisations, be it with the WDR Big Band, orchestras in London, Paris, and Berlin, or as principal guest conductor of the Dutch Metropole Orchestra.

Blauklang (ACT 9465-2) is the final part of an ACT trilogy in collaboration with Vince Mendoza and the WDR that began in 1992 with the Grammy-nominated Jazzpaña (ACT’s very first production) and continued with Sketches. At the same time it is a work that is similar to Jasper van’t Hof’s album Blue Corner (ACT 9228-2), that came about through a suggestion made by Siggi Loch who, as a passionate art collector and friend of the colour blue, has always sought a way to build the bridge between music and fine art. And so now Blauklang.

The showplace for the recording of the premiere performance of Blauklang was the Traumzeit Festival in Landscape Park Duisburg North. The festival was the perfect framework for the recording: it is seen as a “celebration of the senses”, going beyond the boundaries between genre and style and a cross-breeding of the arts, speaking on the same level to both ear and eye. Mendoza’s work for Traumzeit arose by way of a slide show of Nay’s “rhythmic pictures” from the early 1950’s exhibited in Duisburg. The tonal colours and coloured tones were realised by an ensemble of top-class musicians that were brought together exclusively for this occasion: Nguyên Lê, Markus Stockhausen, Claudio Puntin, Steffen Schorn, Frank Sackenheim, Arkady Shilkloper, Jon Sass, Lars Danielsson, Ulla van Daelen, Peter Erskine, Christopher Dell and the String Quartet RED URG 4.

Two more original compositions, “Habanera”, and “Ollie Mention” were added to the Bluesounds Suite, along with a Catalonian folk song, “Lo Rossinyol”, and another Miles Davis classic out of the album “Miles Ahead”, “Blues for Pablo”, an homage to Pablo Picasso. Trumpeter-painter Miles Davis had always been fascinated by Picasso’s colours, along with the rhythm and movement of his paintings. And Picasso’s painting process, of painting over, applying layer after layer of colours is something that the arranging art of a Gil Evans absorbed. An art that Vince Mendoza carries on through his own palette. By the way, Picasso’s most famous period was known as the blue…