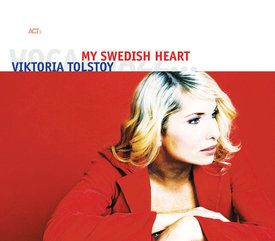 Viktoria Tolstoy achieved both a national and international breakthrough with her ACT debut album "Shining On You". While she had already shown on her Blue Note Album "White Russian" with E.S.T. (1997), that she belonged to the first rank of young Swedish female jazz musicians, she was virtually unknown outside her homeland.

While the music for the first ACT album by the great-great-granddaughter of Leo Tolstoy was all specially composed by Esbjörn Svensson, this "beautiful singer with classiness coursing in her blood" (Tonart) has dedicated her latest totally to her home country. MY SWEDISH HEART is an expression of love and a tribute to the great Swedish jazz composers from Lars Gullin to her contemporaries.

Sweden developed a particularly active jazz scene before all other European countries, helped by the fact that many American greats didn’t just tour in Sweden but also made their homes there. The list is long and impressive: Stan Getz, Art Farmer, Dexter Gordon, Sahib Shihab, Ben Webster, Idrees Sulieman, Bill Evans, Quincy Jones, to name but a few. The musical exchange of these great talents with the local scene resulted in a long list of exceptional local jazz musicians: Lars Gullin, Arne Domnerus, Ake Persson, Rune Gustafsson and Bengt-Arne Wallin. All were accepted as equals by their American friends and peers, even in the 1950s. The album releases from that time bear witness to the high level of musicianship.

But the true beginning of what today is regarded as self-sustaining "Jazz Made in Sweden" lies in the early 1960s. Jan Johansson was the first musician who brought Swedish folk music into jazz. Unfortunately he was killed in a car accident in 1968,  but his few albums have been treated for over 40 years as an important cultural legacy in Sweden and can be found in almost every home. His idea of reassessing Sweden’s traditional musical roots are still clearly heard in today’s Swedish jazz. A further milestone in this development was the 1962 production "Old Folklore In Swedish Modern" by Bengt Arne Wallin, who took the concept to an orchestral level.

As well as the many composers and instrumentalists there were also an incredible number of good female jazz singers in Sweden. Monica Zetterlund was the first to be celebrated as a "Swedish Sensation" in the USA as early as 1958. Her album "Waltz for Debby" with the Bill Evans Trio can be regarded as one of the best vocal jazz albums of all time. Other Swedish singers such as Alice Babs, Bibi Jones and Anita Lindblom made careers in Germany as easy listening pop singers. Only Monika Zetterlund didn’t compromise herself.

For her new album Viktoria Tolstoy has immersed herself deeply in Swedish jazz culture and selected a special homage from the large choice available. "My Swedish Heart" begins with "Grandma’s Song", a nod to Jan Johansson.  He recorded the folk song "Visa Fran Järna" almost exactly 40 years ago just for piano and bass duo and had his first successful recording with it. The new lyrics are by Viktoria Tolstoy’s  husband Per Holknekt, who is responsible for the English lyrics for most of the tracks on the new CD. In "Grandma’s Song" you can feel the influence of Swedish folklore on American Country & Western.

The original orchestral arrangement of 1962’s "Den Första Gang" has been newly updated by Bengt-Arne Wallin for Viktoria Tolstoy and the Bohuslän Big Band. The master remains sprightly and active even in his mid 70ies! Other highlights are the new arrangements of "I Hope it’s Spring for you" by Lars Gullin, with lyrics by Chan Parker, Charlie Parker’s wife, as well as "Dennys Dreaming".  "Jag Yet En Dejlig Rosa" is dedicated to Vikttoria Tolstoy’s great role model Monika Zetterlund, who recorded this song in Swedish with Bill Evans in 1964.

Five of the 11 compositions are by friends and colleagues of the young singer. They can all be regarded as todays most important exponents of "Jazz Made in Sweden": Anders Jormin, Jacob Karlzon, Lars Danielsson und Esbjörn Svensson. And of course, not forgetting the producer of "My Swedish Heart" - Mr. ‘Red Horn’ Nils Landgren.