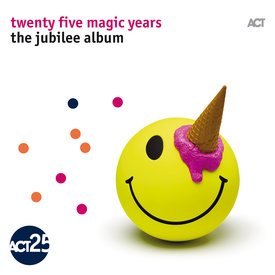 It is now 25 years since Siggi Loch properly set about being “useful rather than important” (the phrase is from his autobiography) and to move on from a successful and distinguished career in the international record industry to found his own independent jazz label, ACT. What he had in mind from the start was that it should be a platform to promote the kind of musicians who are capable of touching the emotions of their audience, of creating excitement and winning people over, artists who tend to court danger by avoiding the well-trodden paths – in other words they make their music “in the spirit of jazz.” Now, a quarter of a century and over 500 albums later, it is definitely a case of having delivered on that promise. As a “discovery label”, ACT has written part of the continuing story of jazz, and its family of musicians are now leading figures in the genre.

ACT is proud to mark this milestone with a “Jubilee Album”. However, the label has taken care to steer well clear of the predictable. Except three tracks everything on the album is being released for the first time. Furthermore some tracks were in fact especially recorded at sessions involving a gradually permutating all-star line-up at the Hansa studios in Berlin. The result is a newly crafted summation of the kind of music for which ACT exists: music that can touch the heart, stir the soul and lift the spirit of the listener. It is a kaleidoscope of magical musical moments by artists with an openness of mind to all genres and styles.

The opening track is the Beatles’ “Come Together”, interpreted by Nils Landgren, Ulf Wakenius and Lars Danielsson. This placing is deliberate. First it is a particularly fine example of the ACT motto of “connecting the unexpected,” following the long-standing jazz tradition of taking material from other musical areas and repossessing and transfiguring it through improvising. Great musicians reveal all kinds of unimagined things in seemingly well-known music. This stellar trio is also representative of another distinctive achievement by ACT, namely that the label is out in front as the leading exporter of Swedish jazz to the rest of the world. Landgren has been an exclusive ACT label artist since 1995 and has become the label’s most successful artist. Here on the “Jubilee Album” he also shows his funky side in “Walk Tall”. In “Paco’s Delight”, Ulf Wakenius pays homage in a duo with his son Eric to flamenco icon Paco de Lucía.

The Swedish connection has been particularly fruitful for ACT. It was through her one-time accompanist Esbjörn Svensson that vocalist Viktoria Tolstoy joined the label, and the “Jubilee Album” features her singing his irreplaceable and bittersweet composition “Monologue”. The album’s closer is Svensson’s “Prelude in D Minor” and that placing has been done on purpose too. Svensson was the most important innovator in European jazz right up to the time of his tragic and fatal accident in 2008, and this solo piano piece was the only completed track from a solo album which was planned but sadly never completed. “Dodge The Dodo” reminds us of the massive charisma of the Swedish genius. Svensson’s classic tune is brought to us emphatically yet subtly by a quartet consisting of Polish violinist Adam Bałdych, Finnish Pianist Iiro Rantala and flautist Magnus Lindgren.

Alongside Svensson, Bałdych and Rantala, the Norwegian saxophonist Marius Neset with “Prag Ballet“ is another example for the “Sound of Europe” which the ACT label has welcomed into its fold since the start. This commitment has been followed through with continuing and growing success, as can be vividly heard in “B&H”, a track from a live album recently recorded by the brand new combination of French stars Vincent Peirani and Emile Parisien with Swiss vocal phenomenon Andreas Schaerer and pianist Michael Wollny, who “breaks new ground for his instrument.” (The Observer, UK)

Wollny is a once-in-a-lifetime talent. He is also rare among German jazz musicians in that he has successfully carved out an international profile. He is heard on this album as part of two more units: “Swing, Swing, Swing” is an explosive performance in a duo with Germany’s foremost drummer Wolfgang Haffner. This track demonstrates another important tenet for ACT: that home-grown German talent should never be overlooked. Wollny also plays “White Moon” in a duo with Iiro Rantala recorded live at the Philharmonie in Berlin, and this reflects the mission of ACT to present exceptional and pre-eminent jazz pianists to the widest possible audience. Finally, this birthday party could hardly be complete without the “great artistry of a genuine vocal marvel” (Vogue): we hear Youn Sun Nah’s “Bitter Ballad”.

The “Jubilee Album” is a retrospective, a panoramic view and a peek into the future all rolled into one. As these exceptional artists perform unforgettable compositions, it becomes clear what ACT has been, what it is, and what it intends to remain: a reliable compass for new and exciting music “in the spirit of jazz.”