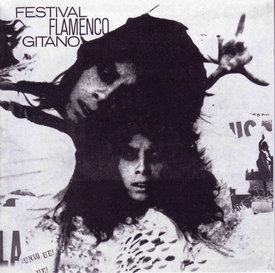 The authentic Spanish Flamenco art is artistically the richest. and liveliest folk-music in Europe. For some reason, although not lacking in popularity, this is less well known in the greater part of Europe. There are several reasons for its comparitive obscurity and they call to mind the situation of Blues in America before its "discovery" in Europe: confusion of concepts and standards, mixing with popular fashions in music, cabaret and night-clubs. Most of those activities do not display the true Flamenco art.

The desire to open the door to a wider understanding of the Flamenco art and its artists and to make known the music which has inspired a wide range of contemporary music and especially Jazz, led to the resolve to call exclusively upon those who formed this art, and who preserve its essential nature in the closed circles of their own communities: the GITANOS, the Spanish Gipsies. Federico Garcia Lorca said: "... these people have united the most ancient elements of our country with the oldest they brought with them to Andalusia, and given the definite form to what we call the CANTE JONDO. They are the soul of our soul...."

THE FLAMENCO IS THE BLUES OF EUROPE. Both have strong African roots and both were created and kept alive over the century by depressed minorities.

In November 1965, Lippmann and Rau, the organizers of the American Folk Blues Festival, followed this successful event with the Festival Flamenco Gitano. It was an instant success. On November 15th the touring qroup was invited to a recording session which took place at the old ball-room of the historical Hotel Esplanade in Berlin. The result. was an outstanding celebration of the classical forms af authentic Flamenco: Soleá, Alegria, Fandangos, La Cana, Siguiriyas and the Saeta. The cast included, among others, the incredible young dancer LA SINGLA, RAMON MORENO, who for many years won the prize of the best Saeta singer in Spain, and Juan Maya Marote, the great guitar player who later became a living legend of the art form.

For many reasons the Flamenco Festival Gitano 1965 is a historical document and now available on CD for the first time.