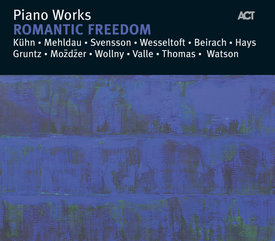 PIANO WORKS: The King of Disciplines in Jazz from ACT Records

Solo performance in jazz: that’s a test that puts you through your paces. No rhythmic cushion to make you feel comfortable, no musical partner to allow a creative interplay – just the instrument on its own, with which the player must achieve a range of colour and a swinging elasticity. Nowhere is the tradition so rich and diverse as in the jazz discipline of "piano solo". From the early virtuosity of Art Tatum to the marathon solos of Keith Jarrett and the radical improviser Cecil Taylor, piano solo performances have developed to such a level over more than half a century, that they can take the breath away of both listener and fellow pianists. To this can be added those who regarded the piano as a second instrument, such as bass colossus Charles Mingus, who knew that piano solo could unfold a timeless and fascinating expressiveness.

This background shouldn’t be intimidating. Indeed, it’s why such incredible pianists from today’s jazz scene are included in the new series of releases from ACT. They are musicians from a variety of backgrounds, who use the keyboard to create music which is unique to them and has a special focus.

The new Piano Solo Edition will be launched with "Romantic Freedom", a collection of solo recordings by outstanding pianists personally chosen by the label director, Siggi Loch.

The Swedish pianist Esbjörn Svensson – who has received numerous awards for his work with the trio  e.s.t. – composed "Prelude in D-Minor" especially for this album as a foretaste for his solo album, which is planned for release in 2007. The young German shooting star Michael Wollny  (Call it [em] ACT 9650-2, Melancholia ACT 9433-2) presents his very first solo recording ("There Again") and the American (and Paris resident) Eric Watson is represented on this compilation by the track "Exits". Complete solo albums of both are scheduled for release in 2006 as a part of the new series. The American piano star and guest artist Brad Mehldau has kindly allowed his composition "Resignation" to be part of this album. Romantic Freedom also features the Polish virtuoso Leszek Mozdzer with the track "Sanctus" as well as genial artists such as Richie Beirach, Jens Thomas, Bugge Wesseltoft, and others.

The first PIANO-WORKS set of four solo albums begins with a recording by the German pianist, Joachim Kühn: a reflection of his own story ranging from Baroque to free jazz. The American Kevin Hays demonstrates musical images with totally unexpected sound elements. The Swiss pianist George Gruntz balances his love of keyboard between deeper meaning and compositional refinement gained from his big band experience. The Cuban Ramón Valle juggles with a beguiling mix of lyrical beauty and rhythmic strength.

Piano solo in this case is not "just piano". It’s a hazardous enterprise, chance and a musical tightrope walk. The responsibility for the hard substance of the playing is the soloist’s alone, but that can, in fact, create the opportunity for the greatest freedom The opportunity to find oneself and to share. All these aspects mix in these recordings, so that for the listener they represent voyages of discovery and  documents of the true individuality and the essence of jazz. Such different pianists each show themselves in terms of personality and profile to be at the top of their art. Or rather: each shows clearly where his musical heart is, when they are tested in the "king of disciplines" within jazz. A discipline, in which they can find new ways and forms.