Various Artists
Magic Moments 5 "in The Spirit Of Jazz" 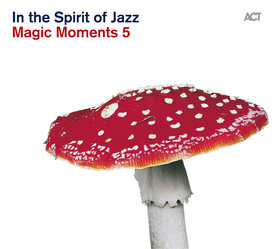 Magic Moments 5 "in The Spirit Of Jazz"

Modern society is changing – away from “either/or” to “both/and”. Ideological, economic and cultural hostilities are increasingly being overcome. Diversity, instead of conformity, is moving more into the foreground, with the emphasis on togetherness instead of that which separates. This also applies to music, especially jazz.

For ACT and its founder Siggi Loch, jazz was right from the start more than simply a narrowly defined style, determined by fixed categories and only one style of sound. He and his team are of the same opinion as the great, recently deceased Abbey Lincoln who once said, when asked to describe the essence of jazz, said, “Jazz is a spirit.”

Music must have spirit and soul – this stance of jazz, its search for the previously unheard, for the power of emotion and its unrivalled inner as well as outer freedom, is the inspiration and leitmotif of ACT. Perhaps this philosophy is also the reason that ACT has twice been voted “Label of the Year” at the ECHO Jazz Awards, not by a jury or by the industry but by the public. This motto also most certainly describes the work of the ACT artists, which is also why it has been chosen as title for the fifth edition of the popular ACT compilations: “Magic Moments 5 is “In the Spirit of Jazz”.

Those who want to know where they are going must know where they are coming from, which is why the opening track of this presentation of great ACT moments is a retrospective. Discovered in archives of the NDR, “Visa från Utanmyra” by pianist Jan Johansson, who sadly died far too early and would have been 80 this year, is a great example of his incredible skill of being able to overcome boundaries and transposing traditional Swedish music to jazz. Just as Johansson was one of the founding fathers of Scandinavian jazz, his Swedish pianist colleague, Esbjörn Svensson, who also died prematurely, is one of the most important architects of European jazz of the past decade (“Prelude in D-Minor”). While his partners from e,.s.t. (Magnus Öström and Dan Berglund with “Piano Break Song” and “Le Var”), are expanding the repertoire in their projects with old rock passions, it is impossible to overlook the genetic code of Svensson’s innovation – a brilliant mix of the melodic and the dynamic which inspires jazz musicians worldwide.

The UK’s Guardian newspaper says that ACT “is presenting Europe’s up and coming pianists to the world” - players like Leszek Możdżer, whose tribute to the unforgettable Krzysztof Komeda (“Svantetic”) removes all boundaries between classical, pop and jazz, and even topped the pop charts in his homeland of Poland – ahead of Sting and Beyonce! Iiro Rantala’s very personal and haunting tribute to “Lost Heroes” has also won the annual award of the German Record Critics as “Best Jazz Album” - with “One More Waltz For Michel Petrucciani”, he honours the exceptional French pianist. And we must not forget the new international figurehead of German jazz, Michael Wollny, who features on the sampler as a congenial accompanist of trombonist Nils Landgren (“Fragile”).

The singers of the house of ACT also exhibit no fears of contact between the genres and a desire for crossing boundaries. Viktoria Tolstoy, for example, when dedicating herself to her idol Herbie Hancock (“Come On, Come Over”); Caecilie Norby, when reformulating classic material (“No Air”) or the recently awarded “Best International Jazz Singer” (Echo Jazz 2011) Youn Sun Nah who, alongside guitarist virtuoso Nguyên Lê, dusts the cobwebs off the Beatles’ “Eleanor Rigby” and transposes it into the global village of the modern day.

Magic Moments 5 “In the Spirit of Jazz” is great evidence that “Young German Jazz” once again has the courage to try something new: the Wasserfuhr brothers, for example, interpret classic jazz styles in an unashamedly modern way, as “Midnight Walk” shows. The outstanding Three Fall trio makes the Califonian rock of the Red Hot Chili Peppers sound almost avant garde, whilst Mo’ Blow reinterpret funk and jazz rock. All this always has its own pulse as drumming veteran and nu-jazz composer Wolfgang Haffner shows with “Heartbeat”.

When Finnish trumpeter Verneri Pohjola plays the closing fanfare, “At The End Of This Album”, it becomes clear - with the ACT family of musicians, a truly international group has united in one spirit to create, with every track, a magical musical moment “in the Spirit of Jazz”.