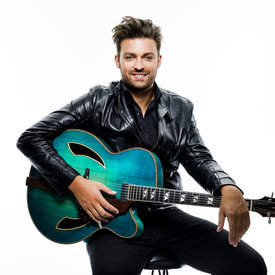 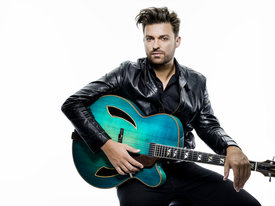 Mixed by Arne Schumann in May and June, 2015 at Schumann & Bach Studios, Berlin
Mastered by Klaus Scheuermann

Since the release of his last album “Love Comes To Town“, word has it that Torsten Goods “is a master of groove“ (Süddeutsche Zeitung), “pop jazz hasn't felt this good since George Benson“ (Kulturnews), because he “plays the guitar like George Benson, sings like Frank Sinatra and composes like Joe Sample“ (Süddeutsche Zeitung). However this 34- year -old is not one to rest on his laurels. Following an early breakthrough in his mid - twenties, he set himself new goals: a move from Nuremberg to Berlin was followed by performances with great jazz musicians like Till Brönner and further establishing his musical identity, among other things by working with pop stars such as Sarah Connor.

Spirituals, blues and roots music form the creative foundation for “Thank You Baby!“ “This kind of music was familiar to me as a young lad. My Irish mum loved listening to spirituals, soul and jazz, and my dad's a blues musician, so when Siggi Loch suggested devoting my new album to this music, boyhood memories resurfaced and I was really keen. It wasn't about wallowing in nostalgia, though, but about expressing myself.“ says Goods, referring to the preparations for the new album.

If special guests and horn arrangements were a distinctive feature of “Love Comes To Town“, here a compact 4-piece line-up is a more powerful statement, since, as Torsten says “Siggi Loch put my dream band together“. That is: on drums, Wolfgang Haffner, who also produced the album. Goods observes “ With his feel for groove and musical reduction, we're definitely on the same wavelength“. Then, on Fender Rhodes and piano, Roberto Di Gioia, an old friend of Haffner's, with whom he created his legendary, funky NuJazz project Zappelbude. Goods remembers being a teenage fan of that group. “Roberto isn't only an incredible jazz pianist, one of the best in that style, but is, like Wolfgang, always open to fresh ideas and now also plays with well-known pop stars like Max Herre“.

The fourth band member is none other than Timothy Lefebvre, the American Rudder bass player who reputedly so impressed and inspired Michael Wollny and Eric Schaefer that the result was the award-winning album “Weltentraum“, the most successful German jazz album in 2014. The fact that Lefebvre plays bass on supergroup Toto's new studio album and is a permanent member of the Tedeschi Trucks Band illustrates how broad his spectrum is, and how ideally suited he is for Goods' purposes. Interestingly, it was a reunion with an old acquaintance: “I met Tim during my studies in the USA in the early 2000s.“

With the band having so many things in common, it was no wonder that, as Goods mentions, “a kind of magic“ set in. “We simply tried the tunes out till we reached the point where we thought we'd got it. Then we recorded them three times, each recording being slightly different. Then we had the take. The idea was to make the music sound pure and just like a live studio perfomance, without any overdubs, exactly as they would have done it in the sixties.“ “Thank You Baby!“ convinces on that score across the board: whether it be the irresistibly rolling, archaic “Work Song“ by Nat Adderly, Ray Charles' “Hallelujah I Love Her So“, steeped in sixties charm,or the reharmonized, deeply melancholic and reduced-to-its-essence “Where Did You Sleep Last Night?“ by Lead Belly, the fully improvised standard “Afro Blue“, composed by Mongo Santamaria, or the killer swing of “How Sweet It Is“, the Motown classic made famous by Marvin Gaye. This song and its lyrics were the inspiration for the album title : “With sweet love and devotion, deeply touching my emotion. I want to stop and thank you baby“. When Siggi Loch heard this line on the master tape he knew at once that that was the theme for the whole album. For Torsten Goods and his fellow musicians have embraced the repertoire with love and devotion, to deeply touch the listener's emotion. Please don't stop....Thank you, Torsten!