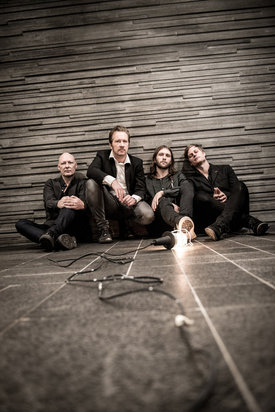 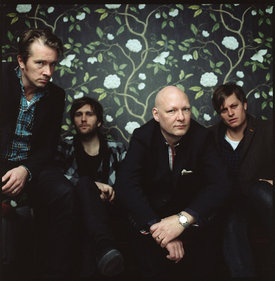 A new beginning for Tonbruket

Tonbruket's first three albums put down a strong marker... Over the course of their three albums, the Swedish band Tonbruket have comprehensively defined the part of the musical universe which they choose to inhabit: a world on the outer boundaries of unshockable prog rock, of uncharted avant-garde folk, and of the kind of jazz where the rule-book has been thrown away. Tonbruket have been able to put down a decisive marker of their identity because each of the members is such a strong individual musician. The band represents the meeting of four people who have already proved themselves in many different contexts, and who were pleased to bring all of the vast experience that they had gathered into this new situation. Bassist Dan Berglund had been an intrinsic part of the reinvention of jazz which took place in the Esbjörn Svensson Trio. Guitarist Johan Lindström is a multiple threat on a whole panoply of stringed instruments. Keyboardist/ violinist Martin Hederos is a member of “The Soundtrack Of Our Lives,” one of the best known Swedish rock bands. Drummer Andreas Werliin is in bands such as “Fire!” and “Wildbirds & Peace Drums,” where he ventures into the experimental and the psychedelic.
Considered together, the first three albums of Tonbruket form a consistent trajectory. “Tonbruket”, “Dig It To The End” and “Nubium Swimtrip” are an indivisible whole, in which the band remained true to its vision to take conventional jazz formats and shift them in the direction of instrumental rock music.

...but a creative time-out was the right thing…. Before they embarked on their new album, however, the four decided to re-charge their creative batteries. After the album tour for “Nubium Swimtrip”, Berglund, Lindström, Hederos and Werliin deliberately scheduled an extended time-out. The reason for doing that was not because the band was in any way burnt out – far from it. Each of the four band members, through their involvement in so many other projects, simply had too much else to do. That variety of activity is something which manifestly also acts to the benefit of Tonbruket, because the members let their wide-ranging musical experiences feed into what the band does. However, there are times when these other activities themselves need to be attended to. Andreas Werliin was particularly keen to concentrate on his other bands. Berglund, Lindström and Hederos accepted a commission from the Royal Dramatic Theatre in Stockholm to contribute the music to a play based on a movie by Finnish film director Kaurismäki. The work that the three created followed Kaurismäki‘s aesthetic, and the musicians found themselves exploring very different musical frontiers. They created tangos and polkas for the theatre, and this opened up new points of connection for them. Later, back in the company of Werliin and under the banner of Tonbruket, these new impressions were front-of-mind, and led them off in the direction of producing completely new music.

...to ensure a new beginning…. This, then, is the back-story of how and why their fourth album “Forevergreens” represents such a new beginning for Tonbruket. Some of the tracks are extremely soft and gentle, romantic, acoustic, jazz-inspired, while others use prog rock as a springboard from which to make the short leap into heavy metal. The pieces the band plays can differ hugely from each other in shape, intensity and stylistic origin. The result of this is that the listener's attention tends to be drawn away from the specific and from the moment-to-moment, and towards the totality of what is happening.
Tonbruket's music has always been uncategorizable by genre, but on “ Forevergreens” they have left even that impalpability behind. In its place what they are doing is living their paradoxes, relishing the contrasts between successive tracks, savouring each tempo, mood, frame of reference, and even having fun with clichés. “Forevergreens” is both the quietest and the loudest of their albums. They have never ventured quite so close to jazz – nor have they strayed quite so far from it. The conventional stereotype where bands do a roller-coaster alternation between fast bits where they ratchet up the intensity, and then chill out in ballads is not adequate to describe this band. Their changes of scenery and of musical material are far more holistic and natural.

...with plenty of surprises…. So, let the surprises begin. They start with Norwegian pop-diva Ane Brun, who has had Tonbruket as her backing band for a while now, and whose voice the band introduces from the outset. Surprises and contrasts continue with the post-rock “Mano Sinistra” (the Italian expression for using the left hand in the treble register at a piano), and then on into ephemeral jazz tunes such as “Sinkadus,” in which Ane Brun's voice is to be heard again, and “Music for the Sun King.” Things then get a good deal more intense, culminating in earth-shaking rock-outs like “Tarantella” or “Linton,” and then on into the folksy klezmer/tango combinations of “Polka Oblivion” where Martin Hederos' violin playing has an enchanting vocal quality, and on which Per Texas Johansson's bass clarinet and Martin Holm's tenor saxophone also appear. One might become tempted to call the music on “Forevergreens” 'jazz'...there again, it could just as easily be called 'instrumental rock'... or indeed 'avant-garde folk'. But perhaps the most convincing description of it is the sub-genre that Johan Lindström has invented to describe this journey to the outer limits of all three: he calls it music.