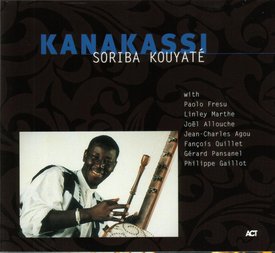 Griots: »We are vessels of speech, we are the repositories which harbor secrets many centuries old. The art of eloquence has no secrets for us. I derive my knowledge from my father, who also got it from his father; history holds no mystery for us, every name has a meaning, a secret import. For the world is old, but the future springs from the past. My word is pure and free of all untruth. Listen to my word, you who want to know« (from Sundiata: An Epic of Old Mali by Djibril Tamsir Niane)

The virtuoso Senegalese kora player Soriba Kouyaté is a griot, one of a group of West African musicians who trace their heritage back to the 13th century and the rule of the legendary emperor of the ancient kingdom of Mali, Sundiata. Griots are the historians, praise singers, and musicians of the West African Mandingo society. In Sundiata’s time, griots tutored princes, and gave council to kings; long after the fall of the Mali empire in 1468, wealthy Mandingo families would employ their own griot to advise them, and help them in negotiations with other Families. The griot’s ancient art, jeliya, is still practiced today, and the griots remain the keepers of the Mandingo oral history and musical tradition. Soriba Kouyaté’s family traces their roots back to the time of Sundiata and the golden age of the kingdom of Mali. Soriba’s father Mamadou Kouyaté is a legendary kora player who performed regularly at the presidential palace of the Senegalese president Senghor. He created ballets, formed instrumental ensembles, and opened the first kora school. Soriba: »My family has been making music since the dawn of time; the playing and making of the kora has been passed down from generation to generation.«

The origins of the kora can be traced to Sundiata’s son Mansa Wali’s conquest of the Gabu region. Situated between the Gambia river in the north and the Fouta-Djallon Plateau in the south, (present-day Gambia, Southern Senegal and Guinea Bissau), the area became a center for the Mandingo griot tradition and the playing of the kora, and remains so today. The kora is a »harp lute«, traditionally with 21 strings, 11 played by the left, and 10 by the right hand. The kora’s body is made from a large calabash gourd cut in half and partially covered with calf skin. The sound is similar to a harp, but its intricate playing style is closer to flamenco guitar. In the hands of a master musician such as Soriba, it is a magical instrument. The kora has a range of three octaves. There are four traditional tunings; all of them use seven note scales similar to the major, minor, lydian, and blues scales in Western music.

Soriba Kouyaté was born in Dakar Senegal on December 23, 1963. At the age of five he began studying the kora with his father. From the age of 13 he accompanied his father on tour playing festivals and concerts across the globe. His travels brought him in contact with the musical traditions of cultures throughout the world and led him to investigate the possiblilities of widening the scope of the kora by combining the richness and depth of it’s griot tradition with various contemporary music. According to Soriba »the kora should be able to play classical music, blues, jazz, funk, reggae and Arabic music; to put it simply, it should be able to play all styles of music.« His eclectic worldview has led to his working with some of the best-known names in music: Peter Gabriel, Youssou N’dour, Salif Keita, Hugh Masekela, and Dizzy Gillespie.

Soriba Kouyaté and Philippe Gaillot first met in 1994 at the African Jazz Festival in Saint-Louis, Senegal, where Philippe was the sound engineer. In 1997, Kouyaté and Gaillot met again at the Festival d’Avignon in France through their mutual friend, Joëlle Merlier. Following this reunion, they began recording the music of «Kanakassi», «Don’t cry» in Mandingo tongue