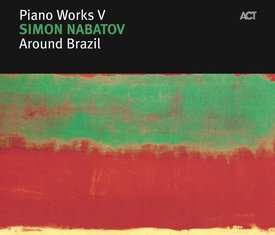 It would be tempting for someone like him to simply dazzle and amaze. Simon Nabatov is technically one of the piano sensations of the last two decades. An artist, whose skills seems to know no boundaries. The stylistic repertoire of the pianist, who lives in Germany and trained at the Moscow conservatory and New York’s Juilliard School, is comprehensive. From stride to free jazz, he seems to have everything that jazz piano’s history has to offer at his fingertips, while pulling baroque, classical and romantic music out of his sleeve with ease, as this recording once again reveals. But more than that Nabatov uses this recording to make an intimate musical statement, by celebrating his love for Brazilian music.

A music that is always vibrant and rhythmically infectious, but can simultaneously be deeply melancholic, subtle and tender. A music that is always coloured by saudade, the very Brazilian form of yearning, bittersweet desire, and sadness contained in joy. Nabatov captures facets of this feeling in his repertoire filtered through the perception of a cultural cosmopolitan. His saudade is poetic, broken and reflected back onto itself several times. He combines a popular bossa nova by Antonio Carlos Jobim with a baroque dance by Johann Sebastian Bach, while eruptive late 20th century free jazz never seems to be far away. Nabatov colours a piece with buzzing notes from the prepared piano, at other times he frames the original’s fragile melancholy with a repeated figure in the piano’s shrill upper register, reminiscent of a musical clock – the composition so treated being "Na Baixa do Sapateiro", by Ary Barroso, one of the most popular dance tunes of the mid 20th century in Brazil.

Subtle alteration on the one side is balanced by sheer enjoyment of the copious repertoire. Of course Nabatov has also selected pieces by two of the famous singer songwriters Caetano Veloso and Gilberto Gil (currently minister for culture in Brazil). Nabatov treats Gil’s "Eu vim da Bahia" as a sensitive, lyrical gem with a subtly shaded touch. "Nenê", a composition by Ernesto Nazareth stays true to the original’s mood. The ravishing close to this CD is "Você é linda", a tender classic by the great poet and ever elegant singer Caetano Veloso. This is a quiet pearl in Nabatov’s ocean of sound, and the whole album similarly bows its head to beauty. And this may be the biggest surprise of this album; a Russian giant’s sensitive tribute to Brazil.