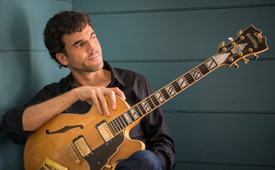 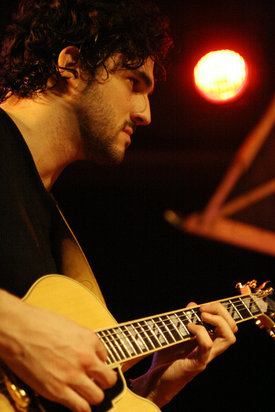 Scott DuBois, the 37-year old American jazz guitarist and composer, is one of the most important figures on the young New York jazz scene. The New York Times has praised the way that DuBois “has begun to make waves” with his “exploratory yet melodic sensibilities, serious compositional ambitions,” and “cohesive looseness against complex subtleties.”

DuBois studied at the Manhattan School of Music. He made his first mark alongside saxophonist David Liebman, who appeared on DuBois's albums for the Soul Note record label, “Monsoon” (2005) and “Tempest” (2007).   DuBois's quartet, with whom he has now been working for the past decade, consists of some of the world's most in-demand improvising musicians: German saxophonist and bass clarinetist Gebhard Ullmann, American bassist Thomas Morgan, and Danish drummer Kresten Osgood. This regular working band performs DuBois's masterfully-crafted original compositions which point to future trends. Their focus is to present these powerful works with dynamic group improvisation and interaction, creating massive, colorful landscapes and a spiritual intensity that cuts straight to the heart.

The New York City Jazz Record has described DuBois's writing as “captivating music for the meditative thinker.” This telling expression goes quite some way towards unlocking its essence, since the guitarist composes in an associative way, through pictures. Indeed, “Winter Light,” which marks his debut as an artist on the ACT label, has a strongly programmatic concept running right through it. The listener is taken on a journey through a winter's day. As we witness the progression from before daybreak right through to the depths of night, DuBois draws the listener in with sounds vividly portraying myriad shifts in the balance of light, leading us through different landscapes, and even making us feel the ever-changing patterns of the weather.

Nineteenth-century philosopher Ralph Waldo Emerson called art an “expression of nature.” “Winter Light” transports the listener on a day’s journey from earliest dawn into deepest night, illustrating the day’s changing light through varied landscapes and weather conditions. I have loved representations of this evolution in visual art, especially in the paintings of Claude Monet, who often worked on several canvases at once in order to track the day’s shifting light. “Winter Light” captures such visions in sound.

“First Light Tundra” opens with the earliest glimpse of light over a cold, desolate landscape as birds awake, call, and fly off into the distance. In a battle between darkness and light, fierce crashing winds obscure the approaching sunrise with flying snow. The sun triumphs in the end.

“Early Morning Forest” introduces a stately pine forest soon pierced by rays of light dazzling snow-filled branches and the white forest floor. Animals call one another to enter the mass of trees. Deeper in the forest, in the darker thick brush, an ominous cold mist fills the air. The animals call again after slowly emerging from the forest into the warmth of the unobstructed morning sun.

“Noon White Mountain” begins with the day’s most powerful light on majestic snowcapped mountains. They are slowly overtaken by dark clouds. A distant storm transforms into a passing gentle freezing rain. Then bright noon light returns.

In “Evening Blizzard” the light is shrouded by the intensity of a snowstorm.

Peace and tranquility return in “Night Tundra” where moonlit snow glows in the darkness.

I hope you enjoy the journey.