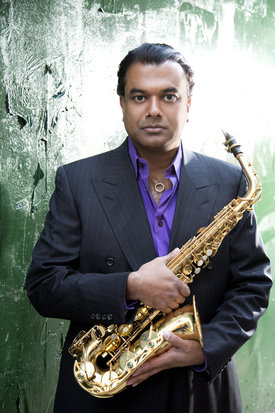 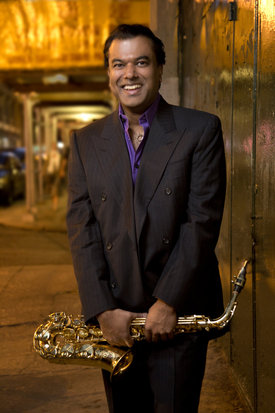 The idea of hybridity has been central to the music of alto saxophonist/composer Rudresh Mahanthappa throughout his career. Most prominent, of course, has been his highly original fusion of east and west, jazz mixed with the sounds of his Indian heritage. But that’s too easy and linear a depiction of this open-eared and inventive composer, who has absorbed an enormous variety of music into his thinking and amalgamated it into a singular vision.

On his new ACT release, Gamak, Mahanthappa continues that multi-directional evolution with a bold, striking set of music that melds leading-edge jazz with innovative reinterpretations of traditional Indian and Middle Eastern approaches, shot through with an electric jolt of prog-rock complexity. Mahanthappa’s distinctly personal sound hybridizes progressive jazz and South Indian classical music in a fluid and forward-looking form that reflects the composer’s own experience growing up a second-generation Indian-American. Just as his personal experience is never wholly lived on one side of the hyphenate or the other, his music speaks in a voice dedicated to forging a new path forward.

Gamak, Mahanthappa’s thirteenth album as leader or co-leader, marks the debut of a new band that is both a reprise and a reinvention. The album reunites the saxophonist with bassist François Moutin and drummer Dan Weiss, the rhythm section from his long-running quartet, which was last recorded for the 2006 album, Codebook. But the group takes on a radically different sound with the addition of David “Fuze” Fiuczynski, a master of microtonal guitar whose eclectic virtuosity offered Mahanthappa a vast new territory to explore. “Dave has checked out so much music,” Mahanthappa says of Fiuczynski. “A lot of eastern music, whether it’s Chinese or Indian or Arabic, and a lot of 20th and 21st century classical music. Not to mention that he has this rock/punk aesthetic that’s evident in his band the Screaming Headless Torsos. And Dan and Francois come from a really wide perspective as well. Dan is just as much into Rush as he is Max Roach or Zakir Hussain. So I knew those guys were going to really bring this stuff to life.”

The name Gamak is derived from the word for ornamentation in Indian classical music, an element that is far more central to that culture than the English word implies. “In South Indian music particularly,” Mahanthappa explains, “melodic ornamentation isn’t random. It’s very specific and stylized and studied.” As for the word’s relevance to his current ensemble he says, “In recontextualizing these things, Gamak can refer to any sort of melodic ornamentation. It’s as applicable to Indian classical music as it is to R&B singers riffing or anything in between.”

While his quartet had always been completed by a pianist, most notably longtime compatriot Vijay Iyer, most of Mahanthappa’s recent projects have utilized guitar, from the Dakshina Ensemble that recorded his groundbreaking 2008 album, Kinsmen, to the collective Indo-Pak Coalition to his most recent ensemble, the electro-acoustic ensemble Samdhi. The instrument’s fluidity is key to his current compositional approach. “I was looking to get back to that quartet setting with Dan and Francois again,” Mahanthappa explains. “But doing something with piano was out of the question, because of the way that I’ve been thinking about melody and ornamentation and the fact that I wanted to delve into the use of alternate tunings.”

Fiuczynski offered an idiosyncratic versatility different from any other guitarist, formed over years of studying wildly disparate forms of music and bringing them together in his own blend of shrieking rock, burning jazz, multi-cultural fusion and head-scratching complexity. He and Mahanthappa had been discussing a potential collaboration for years when they were both hired for legendary drummer Jack DeJohnette’s most recent band, a gig that not only afforded them the opportunity to play with one of jazz’s giants, but to forge their own partnership on stage night after night. “Dave and I got a chance to play a lot together and develop something within Jack’s group that gave me a better insight into how I wanted to write for this group,” Mahanthappa says.

The album kicks off with the wiry prog-rock tension of “Waiting Is Forbidden” and ends with the hurtling punk screamer “Majesty of the Blues.” Fiuczynski is at his slipperiest on “Aboghi,” based on a raga that Mahanthappa describes as “one of the rare ragas that’s treated in very similar ways in both North and South India.” In the quartet’s interpretation, it’s transformed into a rubbery, feel-good boogaloo. Gamak as recorded ten years after Mahanthappa’s breakthrough sophomore release, Black Water, which he revisits directly and indirectly on two tracks. “Are There Clouds In India” was originally recorded on that album, and recently arranged for big band by Jim McNeely, which revived Mahanthappa’s own interest in the piece. “We’ll Make More” is a new piece built upon the same raga and beat cycle as “Balancing Act," the opening track from Black Water.

Most of the titles stem from Mahanthappa’s love of language, a theme that has arisen repeatedly in his work – most memorably on his 2004 album Mother Tongue, which was inspired by the many languages of India. Here, many of the titles were simply evocative combinations of words that the composer saw or heard:

“Waiting Is Forbidden” came from a piece in the Brooklyn Museum, while “Wrathful Wisdom” is a concept from Buddhist philosophy. The piece to which it’s attached is one of Mahanthappa’s most challenging inventions, requiring awkward, counterintuitive alternate fingerings.

Perhaps the most profound title on the album came from an accident of roadside disrepair – a sign on the New Jersey Turnpike where “Stay In Lane” had been truncated to the koan-like “Stay I.” Mahanthappa was struck by the phrase, interpreting it to mean, “Make sure you always try to be yourself and remember your individuality. Which is very difficult to do. I think it’s been difficult across history, but maybe even more so now because we have so much information at our fingertips.”

Despite the depth and breadth of his influences and his restless imagination, one thing which Mahanthappa has managed to do throughout his career is remember to “Stay I.” It’s a lesson that has continually resulted in strikingly individual statements, and Gamak is certainly no exception.