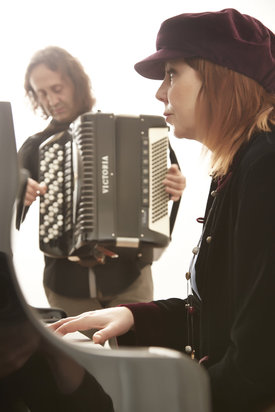 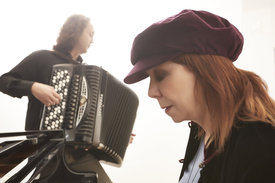 The Duet: one of the most minimalist ways of making music together, but also one of the most enthralling - two people relying entirely on each other in a magical dialogue full of candour and harmony.

The power of the melody is the binding force in the interplay between Rita Marcotulli and Luciano Biondini. "La Strada Invisibile" is their joint path on the quest for the magic of the moment, and their mastery of their instruments is the vehicle for advancing straight to the soul of the music.

The origin of their intuitive musical understanding can be found in the remarkable similarities between their careers to date: both began with classical music at a very early age, both developed their musicianship with a classical education, and both are inexorably linked by the love of the traditional songs of their homeland, Italy.

Her partner in music, Luciano Biondini, with whom she has worked together in a quartet for some years, is one of the top accordion players on the scene. Rabih Abou-Khalil, Michel Godard, Enrico Rava and most recently the young Polish violinist Adam Bałdych, appreciate his independent artistry that is full of overwhelming drama and emotion without losing itself in technical superficiality. Just like Marcotulli, he grounds his love of jazz with references to the Italian music tradition.

Jazz, classic and Italian songs all flow masterfully together in "La Strada Invisibile". Fascinating moments and new musical revelations arise out of the moment, born of small movements, gestures and lines. It is music full of humour, melancholia, tenderness and temperament. It may be a cliché that sensitivity, emotionality and a lightness of being are considered to be typically Italian, but there is a grain of truth in every cliché, as "La Strada Invisibile" proves.