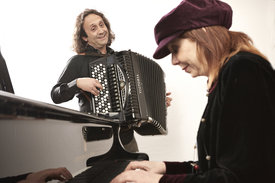 The origin of their intuitive musical understanding can be found in the remarkable similarities between their careers to date: both began with classical music at a very early age, both developed their musicianship with a classical education, and both are inexorably linked by the love of the traditional songs of their homeland, Italy.

Her partner in music, Luciano Biondini, with whom she has worked together in a quartet for some years, is one of the top accordion players on the scene. Rabih Abou-Khalil, Michel Godard, Enrico Rava and most recently the young Polish violinist Adam Bałdych, appreciate his independent artistry that is full of overwhelming drama and emotion without losing itself in technical superficiality. Just like Marcotulli, he grounds his love of jazz with references to the Italian music tradition.