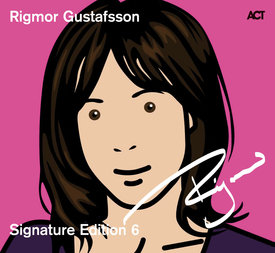 Born on a small farm on the countryside of Sweden, Rigmor Gustafsson discovered early on that music and singing was her distinction. After studying at the Royal Academy of Music in Stockholm she quickly became a sought-after vocalist for big bands, small jazz ensembles and even for TV work. But despite this early success she chose not to take the easy route and decided to broaden her skills, and in 1993 went to New York to continue her training. Within three years she made it from a student (among her mentors were Sheila Jordan and Clark Terry) to a teacher at the renowned Mannes College of Music and worked with her own quartet, who also toured throughout Europe. Back in Sweden she soon found herself at the forefront of the second generation of Swedish jazz singers, who at that time were about to conquer the world. The collaboration with ACT star Nils Landgren on festivals and on his album Sentimental Journey (ACT 9409-2), followed by her own signing for ACT, marked her international breakthrough. Her five ACT CDs to date as a leader have been highly acclaimed by the critics and reached top chart positions in Sweden, Germany and many other countries.

Well trained and versatile, precise and powerful – all this fits for Rigmor Gustafsson’s singing, but the key to her success is not something one could just learn by rote; rather it is her innate, natural ability. Even with the most difficult vocal parts there is no ‘diva’ present – there is a human being, down to earth and in tune with the audience. As the famous German critic Werner Burkhardt once said, “Her soul speaks to the souls of others”. In accordance with this, the songs Gustafsson selected for her Signature Edition do not simply tell the chronological story of her career, but instead take the listener on a tour through reflected experiences and deep emotions.

The range of her musical expressions is as broad as the range of human feelings itself: she sings the standards, like Charles Mingus’ “Goodbye Pork Pie Hat”, as well as several own compositions from her songwriter album Alone With You (ACT 9717-2). She transforms the soul of Burt Bacharach and Dionne Warwick’s ingenious duets (such as “Alfie” and the title track from her album Close To You (ACT 9703-2)), enlightens the sophisticated chansons of Michel Legrand (from her album On My Way To You (ACT 9710-2)), flirts with pop (“So Bad” or Sting’s “Fragile”) and classical music (“Nocturne”) or improvises with sparkling joy on catchy jazz pieces (“Plan #46” and “Fancy Nancy”). In the same way, Gustafsson loves to work with a host of very different musicians - with the young and wild musicians of her early quintet; with illustrious pianists like Jacky Terrasson or Elise Einarsdotter; with magical drummers like Eric Harland or Wolfgang Haffner; with the genre-bending radio.string.quartet.vienna; and consistently with Nils Landgren, as a trombone player as well as a perfect matching singer – their version of James Taylor’s “Fire And Rain” became a touching tribute to Esbjörn Svensson. As a result of this open-minded musical sensitivity, players of all kinds love Rigmor Gustafsson for her spirit and her honesty - as will anyone who hears her Signature Edition