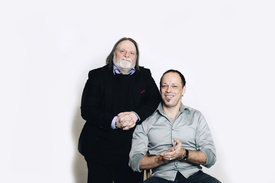 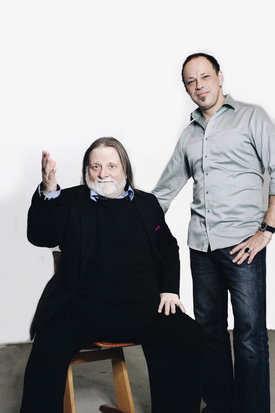 Mixed and mastered by Klaus Scheuermann

Produced by the artists

When it comes to jazz musicians improving with age, the pianist Richie Beirach is a perfect example. With the release of “Live at Birdland New York” the pianist-composer is celebrating his 70th birthday, and demonstrates he’s still at the top of his game alongside his congenial partner of two decades, the Stuttgart-born, New York based violinist Gregor Huebner. Another birthday boy, Huebner is also celebrating a milestone, reaching half a century on May 23, the exact same day as Beirach.

As a tribute, the leading Munich-based jazz label ACT releases a CD featuring highlights recorded in 2012 from their decade long annual week’s ‘live’ residence at the illustrious Birdland in New York, in which they are joined by the high calibre lineup of bassist George Mraz, trumpeter Randy Brecker and drummer Billy Hart.

Big birthdays are though not the only thing the esteemed pair have in common. Both musicians studied independently of each other with the same classical composition teacher, Ludmilla Uhlela at Manhattan School of Music, and both have an eastern European background. Huebner reflects on their enduring creative partnership over 21 years: “Richie always says we still play in the same way today like we played in the first minute in 1996 in his little apartment on Spring Street in NYC and I feel the same way, even though we have incredibly developed our music together. The spirit and the bond between us was already there in the first minute.”

It’s through the development of their own uniquely imaginative version of ‘third stream’, the absorption of elements of the European ‘classical’ music tradition into New York’s postbop idioms that they’ve found so much common ground. They recorded together a triology of CDs for ACT in the early noughties: “Round About Bártok” (2000), “Round About Federico Mompou” (2001) and “Round About Monteverdi” (2003).

A couple of the tracks from these albums are revisited on the CD. “Around Bartók Bagatelle #4” at first reflects the elegant classicism of Beirach’s mesmerizing solo piano recordings then later his restless, harmonically adventurous artistry that has glimpses of the early influence of McCoy Tyner and Bill Evans among other piano modernist giants. As does his solo on Johann Sebastian Bach’s “Siciliana” with Huebner’s violin adding a bewitching yearning, jazz-inflected mediterranean quality.

“I think the music of certain composers is more approachable for improvisation then others,” observes Huebner. “For example Bach was a great improviser and you hear that in his music. In some of the romantic composers you find similar harmonic structures which were used later in jazz and with Bártok and other composers from the 20th century the rhythmic part is very interesting. The mix of the music on the CD is very typical for us, you find classical pieces, our own compositions, a typical jazz standard and a composition by John Coltrane [“Transition”]. Each piece brings something totally new but everything is connected through improvisation.”

Of his originals, one of Beirach’s most popular, a classical-influenced, hauntingly melancholic version of “Elm” is a standout piece. Beirach’s infectious latin vamp on the standard “You Don’t Know What Love Is” is associated with Chet Baker and a reminder of Beirach’s tenure in his band early on in his career. Approaching the ripe old age of 70, it’s a moment to consider Richie Beirach’s high level achievements as one of America’s greatest living modernist jazz piano stylists. Originally a sideman of both Stan Getz and the aforementioned Baker, Beirach among others has enjoyed a memorably intimate association with the saxophonist Dave Liebman since the 1970s, in bands (Quest, Lookout Farm) that included the legendary Billy Hart whose explosive presence at times on the recording eclipses entirely his 76 years on the planet. “For Richie,” Huebner explains, “these are his oldest friends, these are the people he grew up with and these are the people he developed his music together.” In jazz that development doesn’t come to an end. It’s testament to the exploratory ‘young at heart’ spirit of the grand jazz masters on “Live at Birdland New York” that not for a second does anyone rest on their considerable laurels.