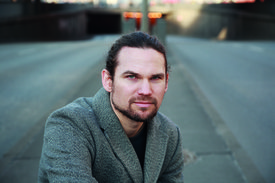 Born in Ravensburg in Southern Germany in 1977 and now based in Cologne, Rainer Böhm has been involved as a bandleader and as a sideman in more than 50 CD recordings and made his mark through some excellent projects as an internationally sought-after pianist in the jazz scene.

2011 his Album “Berlin - New York” appeared on ACT with saxophonist Ben Kraef, Marcus Gilmore on the drums and bassist John Patitucci. Böhm is also known as a long-standing member of the trio of Germany’s pre-eminent bassist, Dieter Ilg and take part in ACT productions like „Otello Live At Schloss Elmau”, "Parsifal", "Mein Beethoven" and "B-A-C-H". The concept of crossing frontiers of genres is at the core of Böhm's musical identity: He is one of those genre-defiers for whom classical music and jazz are not in opposition to each other, but perfectly complementary polarities situated around a central task: how to convey emotions through music. Also he is able to rely on a stupendous technique: seldom can such deft alternation of left and right hands in melody and chordal accompaniment been heard as in his first soloalbum “hydor” that will be released in October 2018. There he surprises with wonderful harmonic resolutions, strongly rhythmic playing, and contrasting aggressive syncopation with a calm steady pulse as an underlying ostinato.

In addition to his work as a pianist, Rainer Böhm teaches as a professor of jazz piano and ensemble direction at conservatories Nuremberg and Mannheim, where he is one of their youngest professors.

He has been awarded several times, for example with the Jazz Prize of the Nürnberger Nachrichten, the New German Jazz Prize, the prize for the best soloist in international jazz competitions in Hoeilaart/Belgium in 2002 and in Getxo/Spain in 2005, the Award of the Deutsche Schallplattenkritik in 2003 and 2007, the first prize in the international Piano Solo Contest in Freiburg in 2007 and the Landesjazzpreis Bade-Württemberg in 2010).