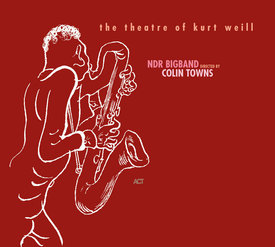 The Theatre Of Kurt Weill

After George Gershwin and Duke Ellington the NDR Big Band celebrates another composer with a centenary:  Kurt Weill was born exactly one hundred years ago on 2nd March 1900.  Songs like "Mack The Knife", "Lost In the Stars" or "Speak Low" have lost none of their qualities 50 years since Weill’s death.    They still today circulate in priceless variations from the greats of jazz – from Louis Armstrong and Sonny Rollins to Carla Bley and Charlie Haden.

Already in the early 1920s Kurt Weill was able to bridge the divide between so-called ‘light’ and ‘serious’ music.  In his repertoire a blues or tango had equal value with a violin concerto.  In jazz particularly, Weill saw the ‘Rhythm of Our Times’ and consciously absorbed jazz elements regularly into his compositions.  Weill also understood how to carry his audience with him, with his clear precise musical language and catchy themes.  He brought an artistic and political dimension to songs which anyone could whistle on the street. From early on Weill found in Bertolt Brecht  a soul mate who likewise was able to take on all stylistic influences, in order to create something new.  Their joint "Threepenny Opera" was a worldwide success in 1928 and revolutionized music theatre.  After fleeing Germany in the mid 1930s Kurt Weill was able to gain a foothold on Broadway and was soon known, along with Gershwin, as "the father of American opera".  In New York Weill was also able to remain loyal to his belief in order to achieve a qualitative art of need: a music which wants to be more than just a light bite but nevertheless remains meaningful and worthy.

The composer, arranger and pianist Colin Towns has been regarded as a fresh breeze in British jazz.  "Towns has proved to be one of the most heartening surprises of the past few years" wrote The Sunday Times newspaper, raving about his music, and the Daily Telegraph swooned:  "He is the most promising trailblazer for the jazz scene."  Towns once played rock keyboard in the band of Deep Purple’s front man Ian Gillan and became later one of the most in demand film and TV composers in the UK.  His credo is:  "Music should have energy and purpose.  I like to take music to the limits and bring the audience along with me."

That’s also true for his homage to Kurt Weill which Colin Towns premiered with the NDR Big Band.  "Mack The Knife", "Alabama Song", "My Ship" and "Surabaya Johnny" merge together in bittersweet arrangements with a breathless change in tempo.  The 50 minute work is however no typical hit medley.

"It’s like entering a room with sounds and colours you know and are comfortable with. There’s always a door you haven’t been through – who knows where it will lead?

Kurt Weill has terrific theatre in his music, from beautiful melodies such as ‘Speak Low’ to songs about murderers like ‘Mack The Knife’.   For me it was a huge challenge to portay this theatre, both the beauty and the darkness. Together with the incredible musicians that make up the NDR Big Band, I hope that we have paid homage using jazz/improvised music as the tool to treating his wonderful music with the utmost respect."

This view over barriers and art, so as to make the complex popular, binds Colin Towns with Kurt Weill.  "When my music has achieved a broad public, then it speaks not against, but rather for itself,"  said Weill.  Towns smiles and nods in agreement.