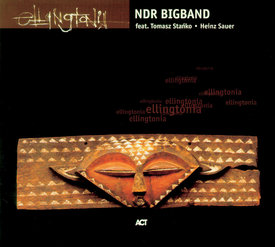 Ellingtonia „The Homage to Duke Ellington"
In the 1oo-plus years since jazz was born, there have been two artists whose contributions to the music have made them, unassailably, the most significant and influential of all - Louis Armstrong and Duke Ellington. As Leonard Feather once observed, "Duke is to composed and orchestrated jazz what Louis Armstrong is to jazz improvisation. "This album, which features some of the classic compositions from the vast Ducal pantheon, is released in celebration of the centenary of Edward Kennedy Ellington, who was born in Washington D.C on April 29, 1899 and died in New York on May 24, 1974.

Ellington’s creative output, which began in 1917 when he made his professional debut and continued up to within a few weeks of his death, was simply staggering. Between November 1924 and February 1974 he recorded more than 2 000 compositions, for the vast majority of which he could claim composer and arranger credits. In his book, The Swing Era, published in 1989, Gunther Schuller concluded his extensive chapter on Duke Ellington by saying: "...in twentieth-century music, he may yet one day be recognized as one of the half-dozen greatest masters of our time."

For every big band, the fine-tuning between the art of soloing and the craft of collective playing is the ultimate measure. Dieter Glawischnig and the NDR-BigBand have continually rediscovered Duke Ellington’s music and in the process, invited such wellknown arrangers as Joki Freund, Francy Boland, Robert Lamb and Steve Gray to participate in the exploration. Motivated by Heinz Sauer’s prize-winning album, Ellingtonia Revisited, the NDR BigBand went into the studio in September and October of 1984 with Sauer on Tenor and Polish trumpeter Tomasz Stanko. Five pieces on the present CD come from these sessions. Another - "Caravan" - was undertaken with Sauer and trombonist Slide Hampton. The 90s have seen a continuation of Ellingtonia included in the NDR BigBand’s concert schedule. The Ellington medley represents the NDR BigBand’s first collaboration with master-arranger Arif Mardin.

The NDR BigBand’s latest high point was their celebrated concert in New York, where they performed Steve Gray’s arrangement, "Diminuendo, Crescendo and Crescendissimo in Blue", a homage to Ellington’s legendary concert at the 1956 Newport Jazz Festival. Duke Ellington kept his band constantly working, playing in all manner of venues, from small nightclubs to giant cathedrals; he was tirelessly in search of new possibilities and stayed in the musical forefront throughout his Iife. The NDR BigBand continues this great Ellington legacy and this album, with its enterprising arrangements, its range of moods and tone colours, its outstanding soloists and section men is a most worthy tribute to the greatest jazz composer who ever lived.

Heinz Sauer was born on December 25, 1932 in Merseburg, Germany. For decades, he has been a major force in the German modern jazz scene. His playing covers everything required in a great tenor player: the melodic creativity of a Sonny Rollins, the hymnal sound of an Albet Ayler or a Pharoah Sanders, and the earthy, hard-hitting blues of an Archie Shepp. Yet Sauer is an original through and through. Best known for his close to twenty years work with Albert Mangelsdorff, he has been a member of the Hessisch Radio Jazz Ensemble for almost 40 years, and has a long and varied musical partnership with the American pianist Bob Degen. He has never had the recognition he deserves, but among the many musicians and fans who know his playing, he is accepted as one of the most important saxophonists on the contemporary scene.

Tomasz Stanko was born in Rzeszów, Poland on July 7, 1942. For some forty years, he has effortlessly swung between tradition and the experimental. He is a master of free improvisation, and again and again returns to this style as the best form to express his Feelings. Stanko says that "jazz was born out of pain", and his musical philosophy cascades through his playing. His extremely flexible style never dead-ends in meaningless pyro-technics; instead, it continually mixes passages of lyrical beauty with outbursts of raw emotion. Tomasz Stanko has long been recognized as one of the greats on his instrument.

Arif Mardin was born in Istanbul, Turkey in 1932. He is one of the most creative and successfull arrangers and producers of our time. The list of stars with whom Mardin has worked with over the last 30 years reads like a "who’s who" of jazz and pop: Diana Ross, Whitney Houston, Aretha Franklin, Phil Collins, Manhattan Transfer and the Modern Jazz Quartet, to name a few. He has won six Grammies for his work, and his arrangements on the CD Jazzpaña (ACT 9212-2) were nominated for another Grammy in 1994. What sets Arif Mardin apart is his unsurpassed breadth. Unlike other producers, he never relies on proven musical formulas, but chameleon-like, is able to adapt himself the abilities and needs of the musicians, thereby getting the best possible music out of any given situation. Mardin comments about the Homage to Duke Ellington project, " I bought my first Duke Ellington record when I was ten years old. Ever since that day, his music has been a part of my life. His orchestral colourings, unmatched by anyone, had a profound affect on me. It’s a great honour to participate in this tribute to the Duke, a creative genius whose music will live forever."