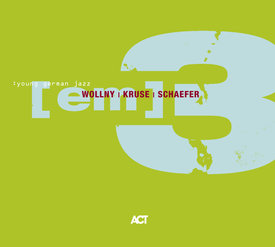 The exciting Berlin trio Michael Wollny / Eva Kruse / Eric Schaefer present their third album: no easy task, after all of the last few years’ critical praise that has accompanied the two previous albums they recorded for ACT, and the same critical acclaim has followed their live performances. “New European jazz” (Stereoplay) and saving “German jazz through excitement and humour” (Süddeutsche Zeitung) is what the critics were saying about “the most exciting piano trio in the world” (Die Zeit). The European critics were in virtually unanimous agreement: “This is the future sound of jazz” (Observer Music Monthly). Along with the praise there have been prizes and awards, topped off perhaps by the Ronnie Scott’s Jazz Award 2007 as “Most Promising Newcomer of the Year”. Last year the trio played concerts in 13 countries and appeared at major festivals in France, Holland, Germany, Italy, and Canada. Their entrance onto the London stage was hailed as “one of the most assured UK debuts in recent years” (Jazzwise).

At its best, and in its greatest moments, jazz is the art that unearths the universal elements that lie buried in each individual. The ad-hoc arrangements of many jazz recordings stand in stark contrast to this aspiration, and to escape the curse of the smallest common denominator, it’s also necessary to have a fixed formation in jazz. Yet especially in German jazz, groups that remain together and come out with new CDs over a longer period of time are the exception. With the simple title [em] 3, the trio [em] with pianist Michael Wollny, bassist Eva Kruse, drummer Eric Schaefer take a swing at one of the most complex statements in sound.

With their third album not only do these three Berliners break with the ground rules of jazz, they also find a brand new starting point for themselves. And – incredible as it may seem – with all this the trio still sounds like a normal jazz band. The bond within the group is so tight that the listener has the luxury of no longer being confined to just concentrating on their obvious solidarity, but also on their various and often widely disparate individual standpoints. This assumes a high degree of trust and the ability to communicate. Yet it is by daring to wage this discourse that [em] brings back to jazz what at the moment is so painfully missed: its urgency and day-to-day relevance.

Wollny, Kruse, and Schaefer don’t try to curry anyone’s favour. Neither do they fish in the delusory slough of the musical Zeitgeist, nor stray into the enticing safety of pop music’s newest trends. And the last thing they are interested in is finding a consensus among the trio itself. Eric Schaefer professes: “We have never been as far apart as we are now,” to which the two comrades-in-arms vociferously agree. In no way is this insight an indication of the beginning of the end; on the contrary, it demonstrates a willingness by the three to wend their way towards an even higher communicative musical plateau. It is exactly this distance of perspective that makes it possible for them to rely on each other and listen with a communal ear so that the poetic nuances may be brought to light. Their collective roots are so tightly intertwined under the concrete playing processes that the mutual decision to take a few musical steps away from each other gives the players an even more satisfying sense of “We”, the trio.

The easiest thing to have done would have been to follow the successful path of [em] II (Act 9655-2). But for [em] to so congeal into some sort of “jazz institution” is the last thing they want to do. They’ve placed the bar of their own aspirations as high as possible, to make it easier on the listener. You can enter the trio’s conceptual musical worlds without having been breast fed on jazz. With complete awareness of jazz’s history the three intuitive perfectionists have preferred giving their curiosity about themselves and the world around them free rein. The normal human instinct for play, coupled with the profound desire for completion, uncover the stories that lie buried between atmospheric intensity and a detail-obsessed exactness. The sense of self-importance that is often rightly criticized in contemporary jazz is peeled away through an understanding of one’s own borders and a desire to discover the terrain beyond those borders. The tension between the attempt and the completion is exploited to the extreme on this album.

The most popular German piano trio of recent years have accomplished nothing less than the re-invention of their music while remaining absolutely true to themselves.

In 2005 ACT began the Young German Jazz series as a forum for the young and extremely energetic German jazz scene. The CD [em] 3 is a preview highlight of things to come in 2008, with such frontier explorers as Chris Gall and the band Panzerballett. Each cross over the borderlines of seemingly impassable frontiers, and the art form called jazz once again sounds sexy and exciting to a young audience!