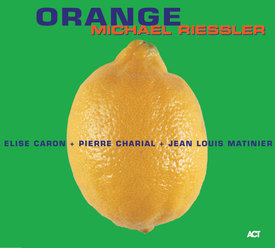 "Je me souviens" is a key sentence around which the Parisian poet Georges Perec (1938-1982) has constructed a patchwork of narrative aphorisms. At the same time, he is open to interpretation, and so Perec’s work acts as a stimulus for Michael Riessler, as he brings his musical perceptions and awareness into play. But then the 42 year old saxophonist, clarinetist, and composer is not interested in expressing things in the normal, accepted way. He wades into the depths of the music, searching for structures and divisions, consistencies and contrasts.

Riessler has headed such lavish projects as Momentum Mobile (1993), Champs MagnÈtiques (1996), and Honig und Asche (1997) over the last few years; projects that at times brought together a round dozen musicians onto the stage and into the recording studio. For Orange, Riessler has taken from the earlier formations and pared down the group to a quartet consisting of an unusual combination of instruments. For instance, the hurdy-gurdy player Pierre Charial, who has played with such contemporary composers as György Ligeti and Iannis Xenakis, along with such jazz musicians as Martial Solal and Sylvie Courvoisier. Charial played in Germany for the first time when Riessler brought him over for his "Momentum Mobile" project. Accordionist Jean-Louis Matinier belongs to Riessler’s list of favorite musicians ever since their time together in the Orchestre National de Jazz at the end of the 80s. The experienced theatric singer Elise Caron had already shown Riessler her stylistic versatility during the complex vocal passages in "Honig und Asche".

Riessler intentionally reduces and condenses the instrumental fullness into singular succinct modes of expression. He accomplishes this change through arrangement and composition. Instead of allowing the differentiated harmonic layers to emerge simultaneously on a musical plateau, the main focus by Orange is on the melodic and rhythmic succession of motifs, sound components and vocal elements. This process replaces the polyphonic momentum with a gradual succession of musical impressions.

For example, there is the singing. Elise uses her voice as a method to combine impressions, associations, and comprehension on the same level. The clear articulation of the words, the dramatically precise structuring of the phrases, the percussive rhythmic treatment of the melodies, and the carefully balanced integration of the whole, makes for a structural sound that is a kind of vocal architecture. On the other hand, Jean-Louis Matinier plays within the musette’s accepted line of musical tradition, in which he takes up the accordion as a juxtaposed counter-weight. He uses this intuitive network of tradition, and through his individual stylistic virtuosity and cunning ease of interpretation, stretches the listener’s accustomed way of hearing.

Pierre Charial enhances the sound impressions of Orange through his instrument’s acoustic and emotional ambiguity; the hurdy-gurdy stands between the mechanical and electronic, variation and uniformity, the human and the synthetic. It ties together a whole series of irritating sounds into an amazingly open tonal network. Since Riessler’s and Charial’s riffing had already been partly prepared before the recording in the beginning of 1999, their playing allows ambivalent tonal textures to seep through, leaving wide-ranging fantasies and images in sound - images which color the way from the county fair to the African market place. Michael Riessler’s Orange is a cleverly worked out masterpiece of cultural associations treading the borderlines between jazz, improvisation, and modern classical music.