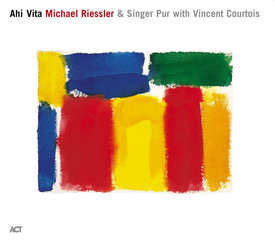 For a long time the German clarinettist and composer Michael Riessler has been known for musical projects where the term "jazz" is quite inappropriate.  Riessler has broken down a variety of boundaries between jazz and theatre, jazz and classical European music as well as jazz and serious avant-garde music, all with the same feature in common: that it would always be inappropriate to put them in that category which has the simple, fashionable title "crossover". Equally ambitious, while being exceptionally attractive technically and aurally, are the pieces for his latest CD "Ahi Vita".

With a title that could best be translated as "That’s Life", Michael Riessler presents 14 pieces which all can be described by the generic term "laments". He has assembled an unusual team. On the one hand there is French cellist Vincent Courtois who is, like Riessler, equally at ease in a variety of styles from Bach through bebop to complex abstract experiments. Most recently he has been known for his collaboration with fellow countryman Louis Sclavis. On the other hand, Riessler employs the dedicated vocal group SingerPur, which has made its name for over a decade for performing highly entertaining a cappella programmes from medieval to contemporary music: specialists in the field of ensemble work that is tinged with the most delicate of nuance.

Laments from the renaissance and early baroque eras have been sought out by the musicians and placed opposite originals by Michael Riessler. Stand-out pieces include the famous "Lamento della Ninfa" (Track 4) by Claudio Monteverdi, composer of madrigals and operas (1567-1643) and pieces by Neapolitan madrigal composer and Prince of Venosa, Carlo Gesualdo (ca. 1560-1613), who was also infamous for the double murder of his wife and her lover. Both of them were revolutionary in the way that they used musical language for their time: Monteverdi with a lively and declamatory means of expressing emotion while Gesualdo had an enormously adventurous approach to harmony with an exceptional use of chromatics ("So much of it sounds as if it could have been written today" says Riessler).

In contrast with other well-known early music projects by jazz musicians (especially those using vocals) Riessler doesn’t take here the original music as a chance to play through paraphrasing: "In no way did I just want to use the originals just for improvisation. The concept has already been taken by others and anyway didn’t seem to me to be appropriate for the chosen pieces, which are already so vibrant, that their dignity would be reduced as a result." Indeed Riessler has taken the Monteverdi compositions completely unchanged – just with the addition of bass clarinet and cello as bass (track 4) or with just the vocal ensemble (track 11). For the piece "O dolorosa gioia" (Track 1) compositions by Gesualdo and Riessler are overlaid, "as if you would lay two sheets on top of each other, fuse them both and at the end come up with a new covering." This piece acts as a prologue to the rest of the CD, being, according to Riessler "Two worlds which confront each other but only occasionally mix".

Two worlds being, according to Riessler, two completely unique worlds. Riessler’s compositions, which take up the majority of this CD, are not just responses to the baroque and renaissance laments that they follow or precede. In the insistent vocal phrases of the vocal ensemble, around which swirls the the cello or clarinet; or in the long, whirling instrumental passages, from which the vocal phrase and the Monteverdi lament evolve, Riessler demonstrates that he is equally versed in the drama of the originals.

He takes them forward with his own approach, and in his own way adequately produces more than just an echo. His compositions are full of strong individual statements, which also give space to the soloing strengths of the two instrumentalists – especially Courtois’ cello (tracks 11, 14)

The collaboration has not been reduced to the lowest common denominator but rather he has been able to create something more than the sum of its parts: an adventure for the ear, which refuses to give a simplistic answer and thereby is able to exert a special appeal. Laments performed with reverence and yet with a personal stamp were the aim: ancient music mirrored in new, but without either being overpowered by the other.