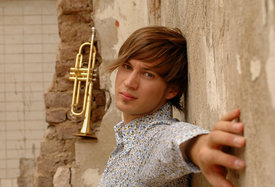 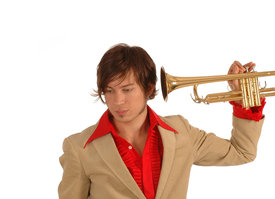 "Matthias Schriefl has done it AGAIN!! This kid is turning out to be one of the most outstanding young players on the German music scene and I only hope that somehow his music will be heard world-wide.
Being in a position to sort-of watch him "grow up" has been a delight as well as an inspiration.
This new CD shows unbelievable growth in his playing as well as his compositional skills. Several of his tunes offer technical challenges which would draw the blood from the bodies of many players while others are as tender and sensitive as you would ever want a tune to be. His string writing on this CD impresses me in the way he integrates the strings as he would other horns rather than just their normal function of providing pretty pads on ballads.
Matthias' playing has reached extremely high levels of expression. His intelligent and highly-musical use of the upper register is reminiscent of the great Kenny Wheeler yet not at all a copy. Matthias is finding his own voice quite readily, I'd say. His music is very "REAL". That is to say it is deeply honest, sensitive, humorous, and adventurous. I loved his use of the false-fingering technique in producing the quarter tones lines on "Danke".
This is a beautifully produced CD. Congratulations AGAIN, Matthias. What's NEXT?"
Bobby Shew

Jazz, punk, and strings thrown in for the bargain - who on earth would dream up something like this? Matthias Schriefl: A young musician from the Allgäu, who has brought us all kinds of weird and wonderful ideas. The nice thing is: His ideas are infectious; each of his concerts is an inspiring event.

Schriefl is a mere 25 years old, and yet the list of his awards and credits is amazing. He has shared the stage with the most successful international jazz musicians, and along with numerous young-talent awards, he is now receiving similar recognition in the grown-up leagues. One example is the renowned WDR jazz prize for improvisation. “This is no surprise to insiders,” says Reiner Brückner in the magazine WDR-Print, “for although he is still in his mid twenties, he has an instrumental control comparable to the old masters: He has a phenomenal range and chops, his talent as an improviser is thrilling, and his arrangements are no less original than his playing”. Yet, Schriefl’s energy and playfulness betray his age – in a most refreshing way.

“I’m not afraid of simplicity, just as I don’t fear complexity”, Schriefl summarises the motto of his new recording, the ACT-debut Shreefpunk plus Strings (ACT 9657-2). The CD offers daredevil experimental jazz that in no way sounds clean or intellectual. The music conveys passion and humour and allows surprisingly outrageous outbursts.

“Matthias is crazy enough to use ideas that others musicians would never dare to”, says professor Andy Haderer, lead trumpet player with the WDR, about his former student. “Not only does he have unusual ideas, he has the technique to translate them into music. Besides, he knows a lot about music: He moves with ease in all styles of jazz, and knows classical and Latin-American music really well.” Despite this encyclopaedic knowledge, Schriefl’s compositions never sound like theoretical constructs. They always retain a real-world inspiration. In “Köln-Kuddelmuddel” he happily portrays his adopted home town, “Michael’s Flat” is dedicated to his Amsterdam friend’s messy pad, a tender ode flatteringly describes Hanna’s hair (Hanna-the bass player’s sister), there is an ironic-apocalyptic portrait of the Bavarian ignorance about the hole in the ozone layer, and “Das was hinten rauskommt” is a tribute to just that: the stuff that comes out at the back.

Besides Schriefl, Shreefpunk consists of three young virtuosos, all with international experience. Johannes Behr, Jens Düppe and Robert Landfermann all live in Cologne like Schriefl himself. They have all been playing together for years. This band is tight, as quickly becomes evident when listening to the CD! It exudes a kind of quality that cannot be created by freelance session players; it is the result of a musical friendship with long days of rehearsal with nobody checking their watches.

Shreefpunk minus the strings is a live band. This is not to say that the strings are just used as background sweetening on the CD. In extended passages they make up the rhythmic foundation, they enhance Schriefl’s ideas by adding an aura of contemporary legit music, or play Schriefl’s musical pranks like playing some Viennese Coffeehouse-music in the midst of an avant-garde storm. The four strings (Gerdur Gunnarsdóttir, Christine Rox, Stephan Blaumer, Daniel Raabe - each of them hold jobs in the best Cologne orchestras) have quite a bit of experience playing jazz. Thus, they create a solid groove even in the most complex rhythms.

The disc also features Schriefl’s multi-phonic playing, next to his comic talent, a distinguishing trait of the young trumpet player. “He is the BEST trumpet player I have heard using multi-phonics. (I should get lessons from this kid!)”, says trumpet legend Bobby Shew.

Shreefpunk plus Strings was recorded using valuable old valve- and ribbon microphones, mixed on an analogue board and mastered to half-inch tape. The actual sound of the CD is a gem in itself – much warmer than the sterile standard of today’s studio productions.

Shreefpunk plus Strings is the eighth album in the series YOUNG GERMAN JAZZ: Another glittering proof of the vitality of the young German jazz scene!