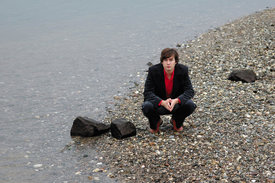 Born in 1981, Matthias Schriefl comes from the South German region of the Allgäu. He received his first trumpet and piano lessons as a 7 year-old, won the national competition “Jugend Musiziert” at the age of 11 and took over the job of directing his school’s big band in ninth grade, leading them to perform his first compositions. At the age of 15, he was the youngest member of the Bavarian State Jazz Orchestra and the German Young Jazz Orchestra. At 17, with his band „Sidewinders”, Schriefl was the winner of Germany’s “Young Jazz Players” competition “Jugend jazzt”, and as prize produced the CD “Die Bestie” (The Beast) for Mons Records. There followed tours of Texas, Russia, and Romania in the next Year. Schriefl was a student at the music conservatory in Munich, subsequently studied at the Cologne Music College from 2000-2005 with Andy Haderer, and studied for a year in Amsterdam. Currently Schriefl is leading various projects in his adopted hometown Cologne, as well as organizing the live jazz series “Jazz-O-Rama”.
Schriefl has received numerous awards as a soloist, composer and band leader. In 2006 he was awarded the WDR jazz prize for improvisation He received the “Star of 2007” from the Münchner Abendzeitung (Munich Evening News), and in 2008 the North Rhine Westphalia Artistic Achievement Award 2008 for composition, conducting, and instrumental music. In the same year, at the suggestion of the Cologne Philharmonic, he was designated “rising star”. In connection with the concert series “Rising Stars”, which is co-ordinated by the European Concert Hall Organisation (ECHO), Schriefl will perform in 2008/2009 in leading concert halls throughout Europe. In 2007/2008 Schriefl and Shreefpunk toured 15 European countries, Mexico, Australia, and seven West African countries, playing in numerous large concert halls throughout the tours.
Schriefl has worked with many renowned international artists. He has been engaged by such prestigious organisations as the WDR Big Band as soloist and composer, and has played with the European Jazz Ensemble since 2006 when he took over Allan Botschinsky’s seat. In 2006 he toured Europe with “Sharon Jones and the Dap Kings”. Since 2007, he has been lead trumpeter with, as well as composer for, the European Movement Orchestra. In May 2007 he toured Southeast Asia with Indian stars R.A. Ramamani and T.A.S. Mani. He also worked with Michael Abene, Django Bates, Carlos Bica, Peter Brötzmann, Bill Dobbins, Dusko Goykovich, Peter Herbolzheimers Rhythm Combination&Brass, Daniel Humair, Lee Konitz, Joachim Kühn, Nils Landgren, Emil Mangelsdorff, Rudi Mahall, Charlie Mariano, Adrian Mears, Don Menza, Dick Oatts, Cino Palagliésu, Wolfgang Puschnig, Claudio Roditi, John Ruocco, Steffen Schorn, John Schröder, Gunther Schuller, Bobby Shew, Alan Skidmore, Markus Stockhausen, Nils Wogram, Phil Woods, Connection Latina, Dirty Dozen Brass Band, New York Voices, NDR and HR Radio Big Band.
Matthias Schriefl received great international recognition for the work with his own band „Shreefpunk“ and the two albums on ACT „Shreefpunk plus Strings“ (ACT 9657-2) in 2007 and „Shreefpunk live in Köln with special guest Django Bates“ (ACT 9663-2) in 2009. During this period, „Shreefpunk“ were touring 15 European and 7 African countries, Mexico and Australia, including some oft he largest concert- and philharmonic halls of these countries.
On his current album „Six, Alps & Jazz“ (ACT 9670-2), released in May 2012 Matthias Schriefl gets back in touch with his musical roots: Presenting “the perfect 'Brotzeit' for open ears and musical souls“ (Wolfgang Puschnigg), Matthias Schriefl – in the most positive sense an “Allgäu” original – turns to his homeland and its folk music with his famous creative dauntlessness. On “Six, Alps & Jazz” the poacher shakes hands with the combatant in the urban jungle; family music meets club sounds – which results in a really innovative, improvised New German Folk Music.