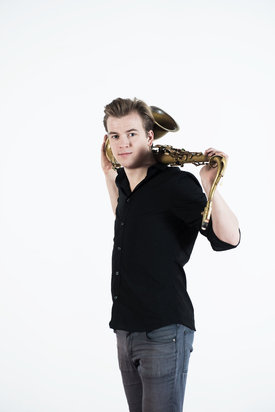 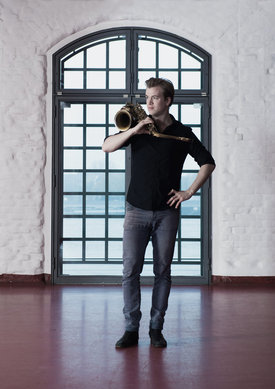 The 29-year-old internationally acclaimed Norwegian saxophonist-composer Marius Neset takes another bold step forward into the art of contemporary extended ensemble writing on his debut recording Lion for ACT. It’s a collaboration with the renowned Trondheim Jazz Orchestra, a project-based collective that since its formation in 1999 has toured Norway with stellar musicians that include Chick Corea, Pat Metheny and Joshua Redman. Neset originally received a commission to compose for the orchestra in 2011 for a concert at the 2012 Molde Jazz Festival. “After the premiere in Molde, these compositions felt so special that we decided to record this album and play many more concerts with it.” he says. With his adventurous and highly atmospheric arrangements, Neset opens up the sonic palette on Lion to an unusually broad range of ensemble colours and textures. The track listing is a mix of the commissioned material and rearrangements of a few of the strongest pieces from his previous critically lauded 2012 larger ensemble release Bird and 2010 debut Golden Xplosion – Guardian writer John Fordham was among the critics at the time raving about it, accurately predicting Neset was, “on his way to being one of the biggest new draws on the circuit” He has made quite an impact on the contemporary European jazz scene for someone of his age.

It’s essential to look at Neset’s background to discover the diverse array of music that makes up his uncategorizable musical DNA. He was raised in Bergen, a sleepy west coast Norwegian harbour town. But, as well, a key musical hub in a progressive Nordic tradition. He would grow up listening to bands from the Bergen post-rock wave of the 1990s that included Royksopp, through to the UK’s Radiohead, as well as music in the classical tradition including the Bergen-born Norwegian folk-influenced great composer Edvard Grieg while others such as Igor Stravinsky would be important too. Add to that a few major sax role models along the way such as Jan Garbarek, Michael Brecker and Chris Potter, muscularly innovative titans of the tenor and soprano from both European and American jazz. Arriving on the international scene with a youthful fire and charisma, his inventively virtuosic sax playing was made for front-of-stage. He seemed to be reclaiming the horn’s traditional position as the king of all post-bop jazz instruments. But against this background, Neset also very quickly established his own identity as a visionary composer, and his originals have become increasingly difficult to separate from his sax playing. “I’m very inspired by people like Frank Zappa, Django Bates, Pat Metheny and Wayne Shorter where the music and the playing is one,” he has said. The new recording has a more organic interaction between sax improv and ensemble interaction than on any previous albums.

It is perhaps the name of Django Bates, the celebrated British pianist and composer, though that resonates most on Lion. In 2003 Neset moved to Copenhagen to study at the Rhythmic Music Conservatory (RMC), and Bates, the professor there at the time, became Neset’s mentor and Neset, Bates’ star pupil. Having enjoyed touring with the Danish big-hitting jazz fusion boy band Jazz Kamikaze, he went on to make a huge impact as a soloist in Bates’ big band StoRMChaser and astonish the full house at London’s Ronnie Scott’s in Bates’ long time small ensemble Human Chain. The inspiration has inevitably rubbed off, and on Lion this is especially the case. We can hear it in full voice on the joyously roller-coaster theme of ‘Sacred Universe’ and on the wonderfully textured, kaleidoscopic development of the opening title track, that as well echoes Bates’ co-led pioneering 1980’s British big band Loose Tubes.

As well as imagining something of the haunting silences and epic space of the Norwegian landscape that Neset was surrounded by when growing up, Neset’s contrasting rock-charged urban grooves and intense cross rhythms perhaps reflect something about his city to city touring schedule. “It’s a very hectic life in that way. I find the way I’m living affecting how I play,” he has said. These apparent conflicting living spaces might be traceable on the title track of the CD Birds in which an ecstatically folky accordion theme morphs into chattering Stravinsky-ish motor rhythms.

The thrilling title track from Golden Xplosion is redesigned subtly with noir jazz-like brass punctuations feeding into the hypnotic intensity of Neset’s intensely spiky rhythm-pattern layering, a signature element of the saxophonist’s compositions. “I started learning drums when I was five and I learnt very quickly to play a groove,” he says. “I think the drums gave me a rhythmic base that was very important. I learnt very young to play in these odd meters so I think I have a very natural feel for it. In the conservatory I met people like [Phronesis] drummer Anton Eger, and practiced grooves on the saxophone with him.” Neset also has the uncanny ability of making one saxophone sound like two or three; leaping from bass groove to melody in the space of a phrase is another standout feature of ‘Golden Xplosion.

On ‘Weight of the World’ we hear a side of Neset’s writing we might not have heard previously. It feature Erik Hegdal’s blustery free jazz-influenced baritone sax and is something usually more attributable to his fellow countrymen, for instance avant-noise Scandi-jazz saxophonist The Thing’s Mats Gustafsson. Neset knows and trusts these musicians. “All of the musicians who make up the orchestra have such a strong musical identity that I didn’t think of them as a big band, but more as twelve strong musical personalities who I’d compose for individually.” The lineup includes tuba player Daniel Herskedal, a fellow student at RMC together releasing a duo album Neck of the Woods in 2012.

“The music was energetic, wild and colourful – like a lion ferociously chasing its prey,” says Neset, the young lion king bravely leading the pack.