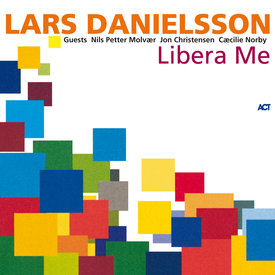 With this debut release on ACT by Swedish bassist and composer Lars Danielsson, the label starts a new series.  It will please not just the usual jazz lovers used to a high musical quality, but also high-end music fans who want to appreciate music in its most up-to-date technical quality. The CD comes out as a hybrid variant of the so-called Super Audio CD, effectively giving three different sound formats. On a specialist SACD player it is possible to appreciate the music in the amazing quality of SACD STEREO, while it can be heard also with 5.1 SUPER SURROUND AUDIO SOUND with the appropriate system. A regular CD player can also play the SACD in a more accustomed CD AUDIO format. This new series will continue in Autumn 2004 with reissues of ACT classics such as "Europeana" and "Jazzpana II". For the first release, label boss Siegfried Loch "cannot envisage a better production to start with": Danielsson does not just play bass and creates with special guests a broad sound world, but also uses the sound capability of a symphony orchestra to great effect.
Lars Danielsson, born in 1958, is a musician with particularly broad interests. At the conservatoire in Göteborg he studied initially classical cello, before changing to bass and to jazz. As bassist - where he can be heard also on the successful CD "Sentimental Journey" of trombonist and singer Nils Landgren (ACT 9409-2) - he has a uniquely rounded sound, which is as lyrical as powerful and brings a breathtaking virtuosity of a unique performer. On this SACD he also plays cello, piano and guitar. Danielsson, who has worked with jazz greats from Michael Brecker to Charles Lloyd, showed the many sides of his ability not least as "Artist in Residence" at the "Strings Of Fire" Festival at the Leipzig Gewandhaus and at the JazzBaltica Festival in 2004.
His highly-developed creativity in many disciplines is clearly set out on this SACD, yet unostentatiously. In twelve pieces, including the title track, an instrumental version "Libera Me" (Deliver me), the sixth movement of the Requiem by French composer Gabriel Fauré (1845-1924), the SACD makes one realise that we have here an instrumentalist of the best quality, a highly competent orchestrator and composer of wonderful memorable melodies - as well as being a leader with a great awareness of the qualities of other musicians. The sinuous soprano saxophone lines of Dave Liebman, the melancholy tones of trumpeter Nils Petter Molvaer, the voice of Cæcilie Norby but also the samples of Jan Bang, are all brought together in a particularly sensitive and harmonious manner.
With the bass as the central pivot and the dazzling grandeur of the orchestra, Danielsson leads one here through the most varied sound worlds. In the magically lyrical introductory piece "Asta" he pays homage to his youngest daughter, while "The Teacher" (Track 3), a wonderful piece for bass and drums, is dedicated to his bass teacher Anders Jormin. The quiet expressiveness of the Estonian composer Arvo Pärt formed the inspiration for "Shimmering" (Track 6), a "Meditation in D flat minor". Memories of the Alhambra, the most famous moorish palace, are represented in "Granada", written for solo bass, solo cello and orchestra (Track 7), while he translates "Both Sides Now" by Joni Mitchell, one of the most effectively lyrical folk songs of the late 20th century into a glamourously eloquent version for his deep-voiced instrument (Track 8). In "Bird Through The Wall" (Track 10), a rainforest meditation, Danielsson also plays marimba, and through the way in which he hits the metal plates engrossed sounding instrument, the celeste. "Cornelia" (Track 11), originally commissioned by the Metropole Orchestra in Holland for bass and orchestra, could be considered the "most classical" composition on this SACD, while the bonus track "Asnah" reflects the most contemporary influences - with cello loops, sampled sounds, a spare Nordic trumpet sound and vocal percussion.
"For me it was always natural to bind my own music with the sounds of classical music", notes Danielsson about the repertoire on this SACD. His objective in orchestration he describes as follows: "When I arrange, I think more about the approach that classical composers would take for voicings, rather than jazz arrangers." As his absolute favourite arranger he picks Claus Ogerman, another who is equally at home in classical and jazz environments (and took part in Diana Krall’s successful release "The Look Of Love"). Meanwhile for playing and composing he is particularly inspired by Johann Sebastian Bach, "the master of the walking bass".
With "Libera me" Lars Danielsson stands not between, but rather, through his heart and his bass, totally absorbed in the various musical worlds of his career to date. All comes together to created an organic rounded whole - in which it is quickly clear that the orchestra is not just an accessory. A musical self-portrait in many colours.
Super Audio CD – Ultimate Listening Experiences:
What’s new about SACD? Existing CDs have a sampling rate of 44.1 kHz, but with the DSD recording an SACD has a 64 times higher resolution for a 1 bit conversion with 2.8224 MHz sampling. Instead of the maximum 20kHz for a CD, the SACD gives a repeat frequency of 100kHz, and that frees almost any filter-related distortion to give a dynamic range of 120dB rather than the present 96dB.