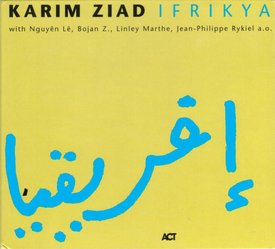 A North African Journey Through Paris.
The muffled and at the same time sonorous call of the Gumbri rings out. This Moroccan string instrument combines melodic and percussive qualities, and stands as a symbol for the music of the Maghreb. Yet before we can get our bearings, a complex Euro-Afro-American sound comes in. Welcome to Paris. Welcome to the multi-cultural ambience of percussionist Karim Ziad’s music.

The 34 year old Karim Ziad looks back to his youth in Algiers, a city that, in contrast to its current condition, exuded a multi-cultural flair not so many years ago. It was here that Ziad collected his first musical experiences. Ziad commented, "When I was young I didn’t just hear music from Morocco and Algeria. Algiers was always a cultural melting pot. We had radio and TV, and Europe was around the corner. A half-hour on the plane and you’re there. I didn’t have to think about my music, since all those elements that I was hearing simply came together." Karim Ziad received his first finishing as a percussionist in bands playing at marriages. Within the Maghreb musical repertoire it was necessary to feel as at home with French songs, funk, Berber music, as well as other African and Oriental musical traditions.

Karim Ziad came to Paris when he was 20. Here he found a multi-ethnic climate with no barriers or borders. He quickly made contact with other musicians, playing with Joe Zawinul, and with Cheb Mami’s band. He soaked up musical experiences like a sponge, and searched for the best way to combine all those musical elements and tendencies that made up his daily experiences. However he never chanced upon that magic elixir that would leave him satisfied. It was with Nguyên Lê’s "Maghreb & Friends" (ACT 9261-2) that he was able to take the crucial next step. "I learned a lot about how to deal with sound from Nguyên. Even so I approach music differently than he does. He is very intellectual. I on the other hand trust only my heart and my ears."

Another fundamental difference: Karim Ziad uses the classical song - form. He sings lyrics. But the spiritual ties between the two friends lie much deeper than a superficial discussion over the traditional or modern content of their sound and the format of their pieces. Both have been able to mix different cultural elements without disturbing the immediacy of each individual musical expression. As with Nguyên Lê’s albums one can approach Karim Ziad’s music from very different perspectives. One can hear it as music from the Maghreb, or come to it from the direction of jazz and pop; one can see it as a style of emancipated Euro-jazz with American influences.

"My main direction is the music of the Maghreb. North-African music. I’ve combined this music with Occidental sounds and harmonies - with guitar, piano, drums, and bass. Paris is the right place to realize this sort of mixture. We couldn’t make the same music in England or Germany." The basic sound and harmonies on the production stem from Europe. But the multi-faceted rhythms and the singing represent Africa.  Karim Ziad wants to communicate on the broadest possible level. "When you play the music of the Maghreb for Europeans, you have to change it in order to reach the public. A lot of Europeans like the music that comes from the Maghreb, but they can’t understand what is really happening in it. But when you mix it with European or American sounds, it immediately becomes softer, more gentle. Then you can reach the people, move them. Music that isn’t meant for anyone is boring."

Ziad doesn’t just focus on the North Africans or the French; he focuses on the whole world. His music sounds like a marketplace of emotions, passions, experiences, traditions, and visions. You can not only hear them, you can taste, smell, feel them. In this way it is nothing more or less than an exact mirror image of the one truly cosmopolitan city in Europe, Paris. Ziad needed only than ten days to record and mix "Ifrikya". The music already existed in his head. He only had to let it out - and then to so move his musical partners that they would, together with Ziad, paint this "picture of love", as he calls it. "I chose the best musicians that exist for this music.Abdelkbir Merchane, the singer on the first piece, is the best Gnawa player that I know. The bassist is Linley Marthe from Mauritius. The pianist, Boris Zulfikarpasic wrote the song "The Joker". If you didn’t know that this song came out of Bosnia, you would take it for Algerian. I already played with Martinique’s Michel Aliba on "Maghreb and Friends". There is also the blind French-Jewish keyboard player Jean-Philippe Rykiel, who has worked a lot with musicians like Youssou N’Dour and Salif Keita. Besides that there are several background vocalists who come from the Maghreb. And of course Nguyên Lê. I myself play a variety of instruments, from keyboards through bass to guitar."