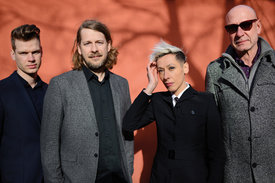 Mixed and mastered by Klaus Scheuermann
Produced by the artists

KUU!’s songs are so well honed, they have a way of emotionally hitting the spot, and also staying lodged in the mind. The reason why this band has been making such waves in Germany is the special chemistry between the artists, combined with a sixth sense and an urgency about the way they communicate. The band members – Kalle Kalima, Frank Möbus (both on guitars) with drummer Christian Lillinger – are never short of creative ideas, and they form a strong yet supple understructure for the phenomenally expressive singer Jelena Kuljić.

Kuljić was born in 1976 in Serbia, and left her home country after the civil war. She had started out as a young impetuous punk, then studied jazz singing in Berlin, where she became an established presence and built a reputation on the scene. She has a parallel career as an actress, and is now a member of the ensemble at the Münchner Kammerspiele. As a vocalist, she has unbelievable energy. To call her a force of nature is certainly no overstatement. She can focus with the directness of a beam of light, and she knows how to hover in the space close to the core of what really matters. As a performer she has authenticity, and makes the messages she conveys not just comprehensible and believable but also unavoidable.

The lyrics are thematically diverse, tending to be based on powerful commentaries on the times we live in. The surreal, the utopian and on occasion the comic characterize her poetry, but Jelena Kuljić does not just colour or sketch things in. She communicates the inescapable truths of a song like “We Watch Them Fall” with an unbelievable alertness and expressiveness. Sometimes she does this with a punk attitude, sometimes in psychedelic indulgence, sometimes she's pseudo-naive. She knows how to provoke and spread mischief. She can feign and evade, but when she declaims words like “It’s a simple gravity. We watch them fall. They are food of the next revolution,” she makes her point with telling precision.

In the title track “Lampedusa Lullaby” KUU! present a dark dystopian vision of human cargo on the move: “Endless journey through the night, over black-eyed sea.” Kuljić can dwell on the feeling of being in unfamiliar places, of uncertain dawn, of strangers and of past events – her songs can become slide shows from other people's lives. Lampedusa is no longer just a Mediterranean island between Tunisia and Sicily. As a real place with its traffickers and migrants, where cross-border death, unscrupulousness and illegality are all too commonplace, it has become a metaphor for a large-scale criminal business where the fates of individuals count for far too little, and where there is evidence everywhere of the failure of traditional politics to meet new challenges. These are the things that Jelena Kuljić has such a strong imperative and a need to sing about.

KUU! is a band of superlatives. It is an outstanding representation of new European jazz at its most innovative, but also shows on “Lampedusa Lullaby” with razor-sharp precision a way that rock music can function in 2018. That way is neither about grandstanding nor competing, it is about collective expression. Without faffing or fiddling, they find a place to go – and they go there together. In the centre, the drums turn up the pressure, while to the left and right the two guitars merge into a gigantic and sensitive meta-instrument. And what emerges quite naturally is good, forceful and evocative music beyond category. It is unnecessary to mention either Zappa or Nina Hagen as reference points, just listen with the volume turned up, and forget all preconceptions. It speaks to us because it has something to say.

The music on "Lampedusa Lullaby" packs an incredible power. It disturbs, connects, it has a way of getting through to the feet, the head and the soul – and all the same time. Sometimes three conspiratorial individualists with their instruments might lay out a comfortable rug for their singer – and sometimes it might be a bed of nails. Heard live, and with Jelena Kuljić's theatrical art coming into play, this music grows ingeniously, inventively – and irresistibly.