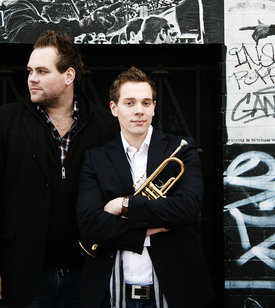 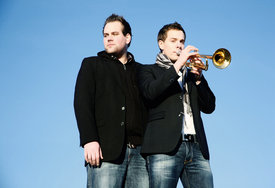 After their debut album Remember Chet (2006), on which the then 17-year-old trumpeter Julian Wasserfuhr followed in Chet Baker’s footsteps, the Wasserfuhr brothers grew into an exceptional phenomenon on the German jazz scene. Such incredible and astonishing maturity had not been heard in a young trumpeter since Till Brönner. Equally impressive was the way his only older brother Roman accompanied him on the piano in a near symbiotic way. The trumpeter Manfred Schoof once said. “A career begins with imitation,” and the brothers have devoted themselves to their heroes at this early stage of their career, because only when you’re familiar with the jazz tradition is it possible to create your own oeuvre.

By playing numerous concerts the Wasserfuhrs quickly reached a broad audience and gained acclaim on the scene. Therefore, it is rather obvious why their second album was called Upgraded (2009) - from the provinces into the international jazz stage. Having recorded with jazz stars Nils Landgren and Lars Danielsson in Gothenburg, they put aside the label “Young German Jazz” and entered the major league of German jazz.

Their new album is called Gravity. It deals with the importance of staying grounded when your career starts to take off. It is about overcoming gravity – the ground beneath your feet has to be firm and steady for you to lift off. The Wasserfuhrs are again in the company of world class musicians – the master of melodic bass from Sweden, Lars Danielsson, is joining them for the second time and the most sought-after drummer in Germany, Wolfgang Haffner, for the first. These two form a superb rhythm section and prove to be the perfect choice – like the Wasserfuhrs they are also keen on jazz that is carried by emotion, full of details and sonic beauty. With his fine sense of drama and atmosphere, Haffner was also the natural choice to be the producer of Gravity. He acknowledges the talent of the Wasserfuhr brothers thus: “Despite the fact that their career has just started, they both know exactly how they want their music to sound. Working together on Gravity was really inspiring and productive.”

What makes the music of the Wasserfuhr brothers so extraordinary is their love for fascinating simplicity, their absolute trust in melody and their sense of lyricism and drama. Also remarkable is that these young musicians refrain from using any gimmickry. “Not everyone dares to do that. The result is the opposite of show-off jazz,” writes well-known German actor Matthias Brandt in the sleeve notes of the album. As the arranger and impressive accompanist, Roman is the musical director to Julian’s leading, dreamy soloist in the main role. Technical skill and instrumental virtuosity is not presented at random, but only when they serve the purpose of the songs and, characteristic of the Wasserfuhrs’ music, convey emotions. “That is the most difficult part in any form of art. But if you succeed in doing that, you get the greatest result,” concludes Brandt.

You only have to listen to their intimate version of Bert Kaempfert’s L.O.V.E., reduced to its musical core and in which everything serves the song’s melodic spirit, to feel the strength of the musical universe which the Wasserfuhrs inhabit. The same goes for the magical atmosphere they create on Sting’s Englishman In New York. These are the album’s only cover versions, however, since the compositions of both brothers display the same similar melodic quality - the lively impressionistic Branca, the hymnal up-tempo blues piece Midnight Walk or the touching ballad Fool’s Paradise all have what it takes to be a jazz standard., while Blue Desert shows how groovy, almost funky, the smooth minimalism of the Wasserfuhrs can be.

Gravity proves that Young German Jazz is as energetic as ever before and promises bright prospects for the future.