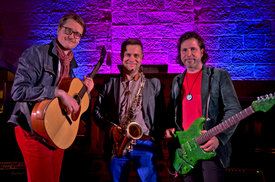 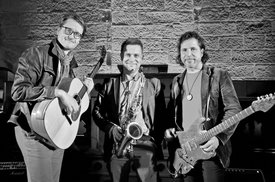 Cover art by Antony Gormley, DOMAIN LV, 2005, with the kind permission of the artist

Out of the Ordinary

The first thing one notices about Jukka Perko's instrumental trio Avara is its unusual set-up: saxophone, acoustic guitar and electric guitar. While that might seem an outlandish combination, the harmonic inventiveness and the lyricism on the album “Invisible Man” are often so completely jaw-dropping, one has to ask why it hasn’t been tried more often. The sound of the group is surprisingly dense for just three players, with each of the constituent voices supporting and complementing the others. Elegiac soundscapes reach out into the distance, evocatively shot through with sudden momentary flashes. The prevailing mood might be Finnish-melancholic; but there is always a glimmer of hope. Rather than needing to be loud to establish its presence, this music defines itself with a quiet strength which is all its own.

Jukka Perko is one of the leading voices on the Finnish jazz scene, combining the strength and muscularity of bebop with Nordic melancholy. There are also reflected shadows of European classical music, of the American jazz tradition and of Finnish folk music. Perko has worked alongside such stars as McCoy Tyner, Red Rodney and Niels-Henning Ørsted Pedersen, and more recently was a member of Wolfgang Haffner's “Kind of Cool” ensemble. He was also particularly inspiring on his ACT label debut, “It Takes Two to Tango,” with another luminary of Finnish jazz, Iiro Rantala.

Perko’s path to forming Avara was a mixture of smart planning and good fortune. He remembers: “the bassist in one of my bands wasn't available one time, so I thought I'd give Teemu Viinikainen with his acoustic guitar a try-out. It worked out so brilliantly, he’s stayed. I've known Jarmo Saari since the nineties. When I heard him playing in a duo with another electric guitar player, I really liked how he got it together, and was intrigued to see how he would sound with an acoustic guitar. So I suggested to him that he should see how things would work out with Teemu and me. From the very first rehearsal, I just knew that the three of us had nailed it.”

On “Invisible Man” the three musicians Perko, Saari und Viinikainen have equal entitlement to create the music. There is no role model to fall back on, the conventional demarcation lines between the rhythm section and lead instrument have been eliminated. The principle behind Avara is to give the protagonists complete freedom and the possibility to stretch out and to develop. They take turns to determine the direction of the music, they can lead, follow, dovetail contrapuntally, or break free. Each of the three has a major influence on how the music develops thematically.

“What interests us is to tell stories and to create extended musical structures”, explains Perko. In fact the whole album is like a single film, a road-movie full of atmosphere, in which strong characterful melodies determine the plot. Whether being entertaining and exciting, or profound and contemplative, Avara definitely stirs the big emotions.

“Invisible Man” may be musically multi-faceted, but is in essence a ballad album. That is partly because of its core sound, and its story-telling character, but also because of Perko's individual way of doing things: “My idea of music has changed in the past few years and become more condensed. You could say it has become 'slower', I mean that in the sense that I am less focussed now on tempo and technique, and much more on depth and meaning. I'm far less interested in the offloading of the emotions of the individual, which have been the mainstay of jazz for such a long time. What holds my attention far more these days is interplay. I want all the musicians to be involved all the time, and not to drop back into the role of listeners.” Thinking about it, what is true for the trio is true for the CD listener too. It is clear that Perko and his two bandmates have achieved what they set out to do: they have created music which you can watch as it unfolds before your very eyes.