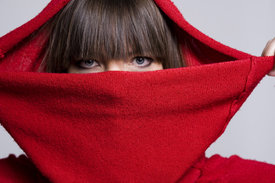 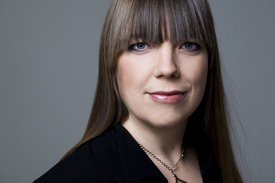 “I grew up in the middle of a big forest. You could shout without anyone hearing you, which is something wonderful. For me, everything began with quietness, with the quietness of nature surrounding me. This will always remain rooted deep within me,” explains Josefine Cronholm, the Swedish singer, composer and resident of Copenhagen for many years. On hearing her ACT debut, Songs of the Falling Feather, listeners will quickly understand what she means by this. There hasn’t been a singer like her - someone who makes quietness so enchantingly audible - for a long time. Cronholm’s clear, high voice comes from out of nowhere, developing and weaving around sounds and melodies with a calmness which is quite unique.

Substance, rather than effect, is Cronholm’s credo and could well be the reason why this breathtaking voice is only just starting to conquer the music world outside Scandinavia - at the age of 37. “I don’t tend to think in the categories of success which are measured by reaching as many people as possible. I do things according to my instinct,” she says, and her instincts were usually right. During her vocal studies at Copenhagen’s conservatory, Django Bates asked her to join his Quiet Nights band, with whom she subsequently spent four years travelling the world. The collaboration which followed with percussionist Marilyn Mazur, one which continues today, was also defining. Two CDs with her own songs and her own band, Ibis, brought the breakthrough she had been waiting for between 2002 and 2004, when she won two Danish jazz Grammys and the Swedish Jazz Award as “Artist Of The Year”. The press described her as “diverse, highly musical and bold” and her enthralling voice was compared to that of greats like Cassandra Wilson and Dianne Reeves.

Yet even at this point Cronholm followed her instinct and temporarily put her highly promising career on hold: “My father died and I had my second son which resulted in a much more radical change than I had anticipated. I had to concentrate on being a mother whilst at the same time finding out who I really was again.” She started to write songs again, “this time at my own, slow pace.” The result of a good five years of introspective reflection is now her impressive comeback Songs of the Falling Feather. The search for the essence, the essential element of a feeling, a moment or a sound, is reflected in every moment of the album.

Cronholm’s song texts are filled with many personal experiences in which you can hear a love of impressionist painting. “I always had a kind of mysterious impressionist painter in my head,” says the singer. “The songs found me, not the other way around, it was almost a compulsion.” They tell of the mystery of love (“Mystery”), the search for lasting happiness (“Angel”), saying goodbye (“Sailor”), and at the album’s beginning on “Paralyzed”, of the paranoia of everyday modern life.

“When I had finished the texts and the melodies, I felt quite lonely and looked for musical companions.” She found this in Henrik Lindstrand, an old friend of hers with whom she had collaborated many years previously in the ambient band, Factum Est. Lindstrand, who later became well known with the rock band Kashmir and who had done a lot of work for film and television, played not only most of the instruments from the piano and e-guitar to percussion and programming, but also took on most production duties. Further companions from the past also joined in: Thommy Andersson, the bassist from Cronholm’s band Ibis, the well known Norwegian trumpeter Gunnar Halle and, from her time in Sweden, Gustaf Ljunggren on the lap steel and acoustic guitar, as well as drummer Per Ekdahl.

For the dialogue with the vocals, Cronholm and Lindstrand consciously chose a particular instrument for every piece. “I wanted to avoid any filling and to penetrate through to the soul of the song, to its pure core.” And indeed she has, impressively succeeding in finding the perfect background for her lyrical sound “paintings” - be it a violin, a piano, a trumpet or a high 1970s e-guitar. Often it is the eclectic sounds, familiar to the ear from musical history, which guide us safely into her world.

The singer shines brighter than ever before with her intuitive, original vocals which are able to almost endlessly enrich every individual sound, with the most delicate variations. “I was really scared before my first singing lesson that I would lose the intuitive contact to my voice, and with this a part of myself, but this didn’t happen. All my teachers helped me in the technical sense but above all they supported me in finding my own expression.” Songs of the Falling Feather proves just how successful this was