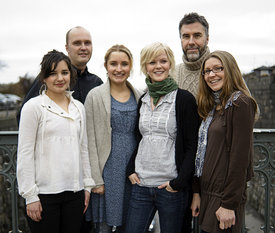 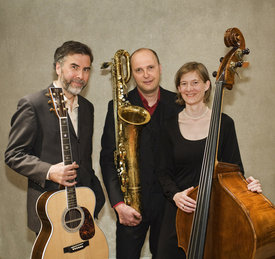 Skaren = The Crust On Snow. The idea of recording a third album with the sound of our childhood landscape “Norrland” as inspiration was not hard. This time though, we wanted to add a different colour to what we have done previously, a sound that would blend with our instruments and add a new quality to the music.

After playing in Leipzig with the phenomenal bass player Eva Kruse we knew that she would fit in perfectly with what we were trying to achieve. We booked a studio and started to write songs.

A couple of weeks before we started recording, our executive producer Siegfried Loch called from Munich. He said, “I have this beautiful record on my desk that sounds fantastic, four girls singing, I think they’re from your part of Sweden. How about if they join you on a couple of tracks?” We listened to Kraja’s first album and agreed. They really sounded great and we realized that adding vocals was a great way to develop our concept.

It’s ironic that someone in an office in Munich discovered that we have the perfect musical match living right next to us in Sweden. We owe you great thanks for that Siggi!

Come with us on a new journey through the mountains, rapids and midnight sun of Norrland.

In past years it has often invigorated jazz as well as world music when musicians have grappled with foreign sounds and styles outside their own cultural background. For some projects, however, what is most needed is authenticity – take for example the Knutsson-Norberg duo and their homage to Northern Sweden, its folk music, and the culture of the Sami. No one else could better bring it about than saxophonist Jonas Knutsson and guitarist Johan Norberg. The two palpably and audibly work through their childhood memories and specific personal, particularly Nordic thoughts and feelings.

Their debut CD Norrland (ACT 9014-2) in 2004 and the follow-up Cow Cow: Norrland II (ACT 9425-2) two years later were lauded by both the critics and the public as “a simple declaration of love to their country”, and “an oasis for the ears”, so motivation and inspiration for a third album was no problem. However for Skaren: Norrland III (ACT 9474-2) Knutsson and Norberg wanted to amplify with new voices and colours what was up until now a bilingual conversation. After they played in Leipzig with Eva Kruse, who is one of the most outstanding figures in young German jazz (among others, with Michael Wollny and Eric Schaefer in the group [em]), they agreed that Kruse’s sophisticated and at the same time crisp, voluminous contra-bass play would fit perfectly with what they had in mind. As the two were working out the new pieces shortly before it was time to go into the studio, ACT chief Siggi Loch assured for a further change when he passed on a real find: a demo album of the female vocal quartet “Kraja” with Lisa and Eva Lestander, Frida Johansson, and Linnea Nilsson – all of whom likewise come from Northern Sweden.

“Jonas and I quickly recognized that the ideal way to further develop our concept was to add these unusual voices. It’s crazy that someone from an office in Munich discovers the perfect musical connecting link – and it comes directly out of our Swedish neighbourhood”, comments Norberg. But it was no less remarkable that Knutsson and Norberg ever met in 1999 in the first place, although they had both been among the outstanding representatives of the Swedish jazz- and folk scene for many years: Norberg as a part of the Duo “Chapter Two” which he had formed and continued for a highly successful 17 years with ACT star Nils Landgren; Knutsson as accompanist to the folksinger Lena Willemark and her internationally successful “Nordan” projects and by the folk-jazz pioneering “Enteli”.

This time it’s as a tour group heading direction-North, as it were, joining up the basic beauty of something jazzy with Swedish folk music. Now Johan Norberg’s mild, often brightly re-tuned Sandén acoustic guitar, his 1934 Levin school guitar, and his Kantele, that zither-like Finnish national instrument have more to communicate with than just the mellow but strong saxophone; now there are Eva Kruse’s minimalistically-accentuated bass and Kraja’s onomatopoetic vocals to correspond with. This time the details can be entirely different. There are the traditional folkways, songs and chorales, and then there are the original compositions, from intimate question and answer games between spirited saxophone and laid-back guitar in “Resan” over to urbane-sounding folksongs like “Vore du ett Blad” on through to the many-voiced and multi-layered hymn “Vaggsång”. There is a fundamental brightness, exuberance, and joy that unexpectedly run through both the most solemn and the most simple pieces.

Clothed in a new line-up, there are a whole new set of possibilities; take the far-North-transplanted reduction version of the Bavarian barn dance “Schwarzer Bua” for example. In this, their third go, Jonas Knutsson and Johan Norberg have evolved a new iridescent expressiveness. At the same time they have maintained their character, their uniqueness, and with it their essential quality. The expression Skaren from North Sweden is dead on: the crusty sheen that forms on top of pure snow.