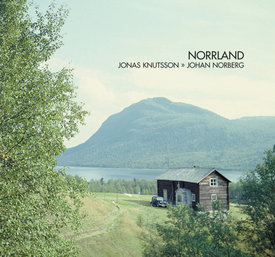 Recorded and Mixed by Johan Norberg at Studio Krubaston, Stockholm 1999 & 2003
Mastered by Claes Persson and special thanks to Tobias Fröberg

It all began during a snowy Christmas in 1999: saxophonist Jonas Knutsson met up for the first time with guitarist Johan Norberg to do some spontaneous recording sessions at Norberg’s flat, and got carried away during several hours of playing. They reached such a level of mutual understanding that the recordings were passed between friends of the two Swedish musicians for the next few years. Then Knutsson and Norberg listened again to the recordings - and decided to go to a proper studio. The result is a CD which both moves between and merges jazz and Swedish folk elements: "Norrland". The nature of the deep understanding between two musicians: thus "Norrland" can be described. Knutsson and Norberg cultivate the fine shadings, and a sensitive dialogue. They create floating, but in some ways plausible, sounds: tender, but never harmless musical images of the landscape, which give the listener an incredibly immediate atmosphere and develop a unique world of colour. It is music that deserves recognition way beyond the jazz and folk communities. It makes you wonder why these two Swedes didn’t discover each other sooner.

Guitarist Johan Norberg is known as one of the best and most interesting acoustic guitarists currently on the Scandinavian folk and world music scenes. With star trombonist Nils Landgren he played in the incredibly popular Swedish duo "Chapter Two" for 17 years, and he also played electric guitar on the live album "5000 Miles" (ACT9271-2).

Jonas Knutsson, with his 1997 ACT album "Flower In The Sky" (ACT9248-2), has shown himself to be a jazz musician with a strong affinity to the Swedish folk idiom and as a saxophonist with great lyrical qualities. He has worked, among others, with folk icon Lena Willemark, in the pioneering folk jazz group "Enteli" and later in the "Nordan" project, admired on both sides of the Atlantic alike.  Knutsson has a delicate and gentle tone, soft but never flabby, and an organic, always intense phrasing. These work together in the magical combination with the playing of Johan Norberg who himself has created satisfying deep but subtle, and finely wrought guitar lines.

This is immediately noticeable from the first track. "Bygdsilium", named after a village in Norrland. Here Knutsson plays soprano saxophone (as he does on tracks 6,8,9 and 10), though he uses members of the saxophone family elsewhere on the CD: baritone on tracks 2,5 and 11 and alto on 3,4,7 and 12. Norberg’s guitars are also quite special. In the same way as Joni Mitchell, Michael Hedges and other folk guitarists known for their sound, Norberg changes the sounds of his strings (especially when chords are created by leaving the strings open, not least with more deeply-tuned bass strings) to give a wider spectrum of sounds Track 12 reminds one of the American guitar virtuoso Leo Kottke, where he looks back on the bottleneck technique of folk and traditional blues to develop a real dynamism. In two tunes (tracks 7 and 11) Norberg plays the Finnish national instrument, the kanele, which resembles a zither. It was first brought to the Baltic by the scything nomads, before the instrument finally reached Finland. The track titles are often difficult to translate: some make one think of the small towns of Lapland ("Hattnijaur"), others about more concrete items such as "The Route" ("Taget") or "The Other Side of the River" ("Ansia", which is from the Norrland dialect), while some are meaningless ("Esivres") and others reflect a combination of musical and biographical: "Abdullah Latikberg" reflects in the word Abdullah the oriental colourings of Jonas Knutsson’s improvisation, while Latikberg is the town where Johan Norberg’s grandfather bought his last dog, Scot.

Pieces which evoke images and tell stories. This is also the case with the CD cover, which uses photos taken by Johan Norberg’s father in 1958 on a journey round Lapland. This makes the whole CD a fascinating piece of both music and art, through which one can appreciate a very special (sound) landscape.