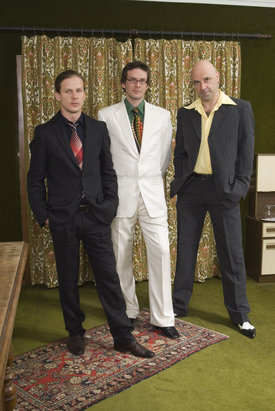 Cellist Jörg Brinkmann, born in 1976 in Kempen, is musically active in a lot of various genres.

He studied at the college of Arnheim, Netherlands, under Michael Gustroff. His engagements as stage-musician for different productions at Schauspielhaus in Bochum, his work as a music-pedagogue at music school in Wuppertal and as an instructor at university of Witten-Herdecke and most of all, his free way of playing the cello with bands from jazz to pop are significant for his rage and flexibility. For many years he intensely worked with smaller ensembles and bands in a chamber-musical way and extended the ways of cello in his very own kind regarding more or less cello-free areas.

He played concerts with Herb Robertson, Frank Gratkowski, Michael Vatcher and works together with musicians like Michiel Braam, cooperating in his jazz-opera, with jazz string quartet Zapp (Amsterdam) - being on tour in Canada in 2006. His musical activities led him through Europe, Africa and Russia together with orchestras and chamber music ensembles.

Together with his trio with Oliver Maas and Dirk-Peter Kölsch he won the jazzwerkruhr-award in 2007.

Pianist Oliver Maas was born in Saarburg in 1980. He was taught classical piano from 1992 till 1996 by Wolfgang Löbker and Wolfgang Löscherbach. From 1996 till 2000 he enjoyed piano-education by jazz pianist Klaus Krisch. He attended various workshops as there are the ones by John Taylor, Uli Beckerhoff, Julian Joseph, Uri Caine, Gunter Hampel and Leszek Możdżer.

He kept his terms at Folkwang Hochschule in Essen with Thomas Hufschmidt and Peter Walter. Since 2005 he works as an instructor at college for music in Saarbrucken. Together with a group called Oma Heinz and with the Jörg Brinkmann Trio he gained the jazzwerkruhr-award in 2006 and 2007. His duo Mop De Kop won the jazz prize St. Ingbert.

Various of his CDs got published by the labels of JazzHausMusik, Cologne and MKW-Records. For a long time now he works together intensely with Bernd Özsevim, Christof Thewes, Jochen Krämer und Daniel Prätzlich.

In many formations and projects he found his chance and ways to collect his musical experiences and finally ran into his hyper-most artistic terms with Jörg Brinkmann Trio.

In 1969 Dirk-Peter Kölsch was born in the region of the river Mosel; he graduated at the college of arts in Arnheim, Netherlands in musical studies and lives in Traben-Trarbach since 1995. He’s well-known as an impulse-giving drummer, mindfully co-musician and as a creative mind. He’s an internationally wanted musician for his initiating energy and non-conventional kind of sound architecture and plays together with multinational groups on well known stages of this world, like there are festivals in Moscow, Montreal, Malta, Istanbul, Perugia, Oslo, Budapest, Paris, Berlin and on the African continent too.

For he likes to perform cuts on musical conventions, he uses more or less unusual sound-producing stuff besides the traditional drums as there are kid’s toys, various commonplace materials, a harmonium and assorted electronically devices to express his own mind of sound. That’s why he is a looked-for man, not only in the region of improvised music. Engagements in orchestral concerts in the classical sector or together with radio big bands are part of his everyday work, as well as performing music for theatre-plays, being part of radio shows and film productions and accompanying writers and actors performing their recitations. Mainly he’s working together with different jazz- and pop ensembles, making numerous CD-publications possible up to now. Further on he works in the range of music-pedagogical activities. For example he worked as a guest professor at music universities in Germany and in the Netherlands.