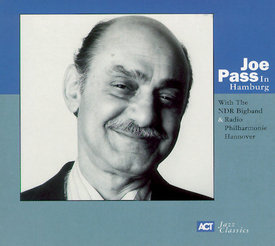 Pass was without any doubt one of the greatest jazz guitarists ever. His death at the age of 65, a little more than two years after the later tracks of this album were recorded, was a tremendous loss to jazz and so the release of any hitherto unissued material by this outstanding virtuoso is very much to be welcomed.

This is what Pete Welding once wrote about Joe Pass:

"...one of the foremost guitarists in jazz; a superlative, immensely satisfying improviser whose work has always been marked by flawless musicianship, deep harmonic resourcefulness, and almost inexhaustible melodic fertility and, not least, crisp, unerring swing."

This is what John William Hardy once wrote about Joe Pass:
"...a stunning practitioner of the art of jazz, a complete musician possessing great maturity, improvisational genius and a communicational warmth."

And this is what Joe Pass once said about Joe Pass:

"Of course, I make a lot of mistakes and I’m still bugged every time I goof. Sometimes it happens when I’m not even thinking of what I’m playing...You see, I have no set program and although I practice, I never rehearse. You know, I don’t think I played a piece in my life that was right from beginning to end."

That last quote vividly illustrates two elements in the character of Joseph Passalaqua - he was a perfectionist who was never completely satisfied with his performances and a man of genuine humility. But where the jazz world at large is concerned, there is absolutely no question that when it comes to assessing the talent of Joe Pass, the prevailing choice is, unassailably,  the gospel according to Welding and Hardy.

When I was editing Jazz Journal International in the 1970s, I launched a regular feature called "Discourse" - a blindfold test for two or more practitioners of the same instrument. One of these involved Joe Pass, Louis Stewart and British guitarist Pete Chilver. At the end, I played a track  - "Falling In Love With Love" - from Joe’s first recording as leader (Catch Me), made in 1963. And I will never forget the response of the three musicians.   Louis Stewart and Pete Chilver sat in awed silence throughout the number, completely lost in admiration for Pass’s brilliant improvisational skills.

But Joe said, after half a bar, "Oh man, take that off! I hated every minute of making that record. I was uptight, nervous and upset." He later said, when asked which of his recordings he was happiest with: "None".Kurt Giese, who produced the programmes, has vivid memories of the two, five-day collaborations between the NDR Big Band and Joe Pass. He recalls that - true to Joe’s own admission - the guitarist disliked rehearsing and was always reluctant to make alternate takes of his solo choruses. "But," says Giese, "he was in very good spirits throughout. At the end of the second session I had a feeling that we were buddies."

For each session the titles to be recorded were selected by Joe from a list of compositions provided by Giese. Pass then recorded the chosen numbers onto cassette to indicate key, tempo and chord sequences and then tapes were sent to the arrangers. Each session involved five days of rehearsing and recording and most of the tracks required only one or two takes.

The result is a compelling blend of standard and original compositions, given imaginative settings by a variety of arrangers, played with characteristic Èlan and authority by the NDR Big Band and showcasing the fluent and imaginative playing of Joe Pass. All the Pass trade marks are there - the elegant improvised fills between the phrases of the melody (as in "More Than You Know"), the faultless sense of time, the clarity of thought and execution and the welljudged balance between chorded passages - played with Pass's unerring harmonic sense and feel for effective inversions - and single note work, including some breathtaking sixteenth-note runs (as in, for example, Harry Warren's "Summer Night").

Of the arrangements made of the tunes selected by Pass for the two sessions there was one he didn't care for - so it was replaced by an Esko Lonnarvalli arrangement of "Soft Winds" retrieved from the NDR archives and originally written as a feature for trumpeter Rolf Ericsson. This, in fact, proves to be one of the highlights of a wide-ranging programme with fine solo contributions from pianist Walter Norris and vibraphonist Wolfgang Schlüter as well as Pass. Also especially notable is Orjan Fahlstrom's brisk marching arrangement of the 1932 Bernice Petkere/Joe Young standard, "Lullaby Of The Leaves", which features a dashing trombone solo by the NDR guest conductor, Jiggs Whigham.

Throughout the sessions Joe Pass and the NDR Big Band work well together in what comes across as an atmosphere of mutual respect, despite the limited time they had to get to know each other - always a challenge in these big-band-with-guest-soloist projects. I have a feeling that if Louis Stewart and Pete Chilver get to hear this album in due course, their expressions will be an eloquent flashback to that day in London 20 years ago when I played them the track from "Catch Me".