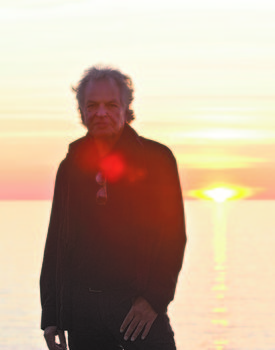 “Maybe when I’m ninety...?” When Siggi Loch first floated the idea that Joachim Kühn might like to make an album of ballads, the pianist’s response was typically jocular, even defi-ant. That initial resistance didn’t last long, however. Kühn, now in his mid-seventies, soon started to settle down at the fine Steinway in his home – he keeps it impeccably tuned – to switch on his DAT recorder, and set to work. “The advantage of being here at home in Ibiza is that I can simply make a re-cording when I want to. When the feeling comes, I just re-cord,” Kühn reflects.

Over a period of about fifteen months he sent a total of some forty individual tracks to Siggi Loch. He would often take pieces, re-think them, and end up sending off sever-al different versions to Berlin. So what emerges on this new solo piano album “Touch the Light” is a distillation from those individual takes, all made on the same piano and in the same space. It flows extremely well as a coherent and delightful programme.

There are pieces here which re-visit important phases in a fascinating and varied career. “A Remark You Made” by Joe Zawinul has a special and deep personal resonance for Kühn. It takes him straight back to a pivotal moment: Zawinul was a juror at the 1966 Gulda competition in Vienna, the event which facilitated the 22-year-old pianist's escape from East Germany. Gato Barbieri’s theme from “Last Tango In Paris” recalls not just the fact that Barbieri enlisted Kühn in 1972 to play on the soundtrack, but it is also a tune he would play countless times later, in his trio with Daniel Humair and Jean-Francois Jenny-Clark. And the Allegretto from Beethoven’s 7th Symphony not only brings to the fore a composer whose music has always made the deepest of impressions on Kühn, but also the fact that his physical resemblance to Beethoven often resul-ted in fellow musicians – notably Gordon Beck, with whom he worked on the Piano Conclave project in the 1970’s – giving him the nickname Beethoven.

The variety of Kühn’s pianism in this collection is quite remarkable. The listener is first welcomed into the inviting, comforting and regular pulse of Mal Waldron’s “Warm Canto”. And yet later, by complete contrast, Kühn’s own composition “Sintra” gives a masterclass in freedom, delay, and the alche-mical art of keeping the listener waiting on tenterhooks. Prince’s “Velvet Rain” is achingly soulful, whereas Kühn found the encouragement to re-visit Bill Evans’ “Peace Piece” from the dignity and restraint of classical pianist Igor Levit’s version of it.

Joachim Kühn can show us ineffable lightness of touch in the Allegretto from Beethoven’s Seventh Symphony. But he can also be forceful, as he gives full and sonorous arm-weight to Barbieri’s “Last Tango” theme. There are also homages to the melodic gifts of some reeds players: “Warm Canto” recalls the way Eric Dolphy on clarinet hovers over the melody on the album “The Quest”, and the spaciousness of Milton Nascimento’s composition “Ponta de Areia” clearly keeps in mind the airy, touchingly lyrical voice of the great Wayne Shorter.

Above all, however, it is in the simplicity and the sheer delight in melody of his own compositions that Kühn both touches the heart and gives us the greatest surprises on this album. “Sintra” is a tune written down in a peaceful mo-ment outside a cafe in the one-time sanctuary of the Portugue-se kings. And the title track “Touch the Light” captures the beauty of the sunset over the sea that Kühn often contemplates from his terrace. Kühn’s remark about that tune is also true of the album as a whole: “There’s a lot of love here. And joy.”