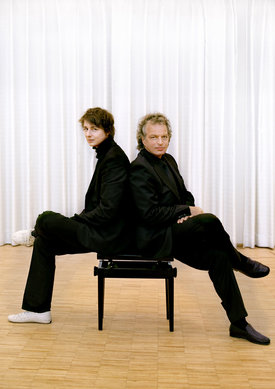 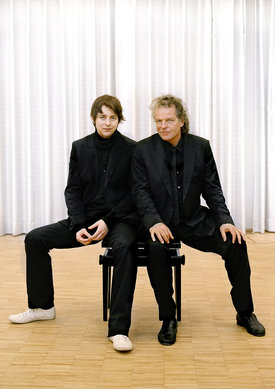 Two on the summit

A meeting of generations on two grand pianos: Joachim Kühn and Michael Wollny live at Schloss Elmau. Duo magic from two musicians who have no need for ostentation

Few concerts have created such a buzz in recent years as this one. Critics, music colleagues and the public raved about Joachim Kühn and Michael Wollny’s joint appearance at the ACT “Jazz and Friendship” festival at Schloss Elmau on September 10, 2008. This wonderful musical encounter had a particularly special depth to it. It was a concert that rocked with unbridled intensity, and showed the profound respect these two outstanding German jazz pianists, each with their own individual style, have for each other. In this case it’s no exaggeration to say that it was simply a moment of musical glory.

ACT chief Siggi Loch had the prescience to recording the concert, and then immediately decided to release the result. And here is the CD of this incredible concert – more than just an extraordinary document, here the listener can witness a summit meeting that spans two musical generations.

Joachim Kühn was born in Leipzig in 1944, Michael Wollny in 1978 in Schweinfurt. Kühn has been a major figure in European jazz since the 1960’s, whereas Wollny is the quintessential new millennium whizz kid. In 2001 Wollny wrote his diploma thesis on “tone vortices” in Kühn’s improvisation, and has marvelled at his playing ever since he first heard Kühn in the ‘90s. Kühn has continually expressed his great respect when talking about Wollny. He immediately agreed to this duo encounter when offered the opportunity, noteworthy as throughout his career he has persistently avoided the two concert Grand combination (the exception being a duo with the legendary French jazz pianist Martial Solal in 1975).

When listening to the album it quickly becomes clear that there was a very special mutual understanding present during this concert. Not once did either of these two virtuosos attempt to outdo the other. Just the opposite: there was nothing less than a heartfelt communication with each and every burst of energy – it was a sort of musical “yes, we can”, two very strong personalities who didn’t try to upstage each other, but rather opted to unite to a higher purpose. As if by magic, their musical moods and voices emerge and intertwine. Already in the shimmering chiaroscuro of the first track, “The Colours Of The Wind”, one can detect a fascinating degree of reciprocal internalisation. Track two, Michael Wollny’s composition “Hexentanz” (“Witch Dance”), is a centrepiece of this meeting, a sort of secret tribute to Kühn. It’s amazing how organically the musicians glide together from scene to scene – all in sublime synchronicity: tender and brusque, exceptionally quiet and tempestuously intense; the music shimmers with an impressionistic glow, then storms out in all directions. Caressing tremolos embrace the listener, contrasted against the crashing and crunching noises emanating from the innards of one of the pianos – together they create a fascinating image.

On offer here is a perfect example of the art of jointly finding unlocking new musical dimensions. Before the concert, Wollny and Kühn keyed in on each other, playing together on two concert Grands for half the previous night so that they would be able to interact with just the right amount of sensitivity and intensity. Kühn’s own harmonic concept, the “diminished-augmented system”, is the source for this complex, multi-coloured dialogue. On two tracks of this CD Wollny (left channel) and Kühn (right channel) play separately, Wollny in a captivatingly lyrical piece titled “Elmau”, and Kühn in his paraphrasing of Bach’s famous “Chaconne” from the partite for violin in D-minor. And also there: Intimate, inspired, soulful improvisation takes the place of virtuoso theatrics: for players on the level of Kühn and Wollny there’s no need for any musical hyperbole – not individually, and certainly not in their collaboration. For two astonishingly talented musicians who have so much to say, they don’t have to shout in order to be heard.