Joachim Kühn
Out Of The Desert 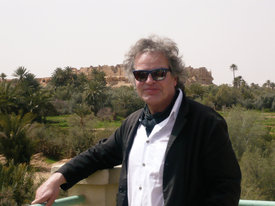 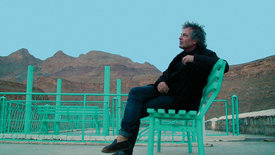 The great avant-garde pianist Joachim Kühn celebrated his 64th birthday on 15th March, 2008, and spent it in the desert doing what he does best - making music. He played in the middle of the Sahara with Moroccan Berbers, the desert musicians of the “Source Bleue des Meski”, a small oasis near the Algerian border. First they jammed directly at the spring, and then they went and recorded at the near-by Palms Hotel on the outskirts of the town of Erfoud. “It was also completely ringed by desert”, says Kühn. “I’m a fan of the desert, and I have travelled a lot, but the trip here went through some of the most beautiful landscapes I have ever seen. On arrival we immediately started playing; we didn’t do a lot of talking first, although, because of the tourism, the Berbers have a good command of every possible language. These musicians are some of the friendliest, most gracious people I have ever met. They are totally relaxed and open. Everything functioned “Inshallah” with a mixture of planning and improvisation. Ever since I was there, I don’t have any more stress. This was my most beautiful birthday present, a great experience, and an amazing musical inspiration.”

Now everyone can hear what so enthralled Kühn; this extraordinary encounter is the core of his new ACT album Out of the Desert (ACT 9475-2).

A jump back in time - the background: At the 2003 “European Jazztival” held in the Schloss Elmau near Munich, Germany, Joachim Kühn met the Moroccan singer and Guembri player Majid Bekkas. In the excitement of playing together they quickly discovered something even more alluring - here the archaic blues, the deep-throated singing, and the intricate rhythms of North-African music, there the harmonic richness, the connection to the classical, and the openness towards all styles. After playing numerous concerts together, in December 2006 the two went into Kühn’s old friend Walter Quintus’ recording studio Zerfall, which is located on the edge of the Eifel Forest in Western Germany. There, together with yet another musician known for building musical bridges, the Spanish drummer and percussionist Ramon Lopez, they recorded the album that has been celebrated as “pure magic” (Jazzthetik), Kalimba (ACT 9456-2) - it was an experience that Kühn couldn’t get out of his head.

Return visit follows visit: on his favorite beach on the island of Ibiza, Kühn pondered how he could delve deeper into Morocco’s Gnawa music. Kühn lives on Ibiza, which lies virtually at the geographic as well as musical intersection of Europe and Africa - no accident on Kühn’s part. He decided to go to Morocco and make music for at least a month. In March 2008 he went on a trip that Majid Bekkas had prepared well. Not only was the visit to the desert matchless; for Kühn, Bekkas, and Lopez, the Espace Bleu Studio in Rabat, Morocco would be the main base for an experiment in trans-cultural cooperation. They got together for extended sessions with three Gnawa musicians, Abdelfettah Houssaini on the djembe (hand drum), and Abdessadek Bounhar and Rachid El Fadili on the Karkabou (hand-held cymbals), all amazing percussionists and singers. And then the talking drum virtuoso from the West African country of Benin, Kouassi Bessan Joseph, joined the group. “Out of the Desert is the first album where Berber musicians together with musicians from Morocco and Benin can be heard playing together”, says Kühn proudly. The documentary filmmakers Christoph Hübner and Gabriele Voss have captured these fascinating once-in-a-lifetime encounters on film.

The desire to get to know one another, and the joy of the musical dialogue is a pervasive force on this album. Kühn emphasizes, “I could learn a lot from my African-Arabian companions. Their rhythm is exceptional - like clockwork, but not static, always on the way to something new. And they are totally open to the way I play”. Out of the Desert is a classic work of group improvisation, while at the same time Kühn’s piano playing remains unmistakeable (on “One, Two, Free”, he once again takes up the alto saxophone). When he digs into the groove of Majid Bekkas’ blues “Foulani”; when he accommodates his partner’s stoical percussion with equally percussive chords; when he takes up a strict form and a minimalistic melody as in “Transmitting”, that relates back to his own harmonic concept, the “Diminished Augmented System”; or when he bursts out of traditional melodic and rhythmic structures and into the boundless realm of free jazz (“One, Two, Free”) - with the creative cooperation that took place in Northwest Africa, Kühn has once again gifted a monument of unique contributions to the music world.

“I don’t know if you can actually learn how to improvise”, was Joachim Kühn’s response to a classical pianist’s question not long ago. Perhaps it really has more to do with a basic mindset in which curiosity and openness play the deciding role. Kühn has demonstrated both his whole life-long. As a young classic pianist in the GDR, thanks to this mental agility, and influenced by his brother, jazz clarinetist Rolf Kühn, Joachim Kühn made the jump over to jazz. Soon after his flight to the West in 1966, Kühn became one of the most important exponents of avant-garde jazz, involving himself in the jazz scenes in Paris, Los Angeles, New York, and Hamburg. He constantly sought out encounters with the widest diversity of musicians, from Michel Portal, Jean-François Jenny-Clark and Daniel Humair to Joe Henderson and Michael Brecker, from Eartha Kitt on through to Rabih-Abou Khalil. And then there is the recent encounter with a young colleague who in some ways is taking a walk down the path that Kühn has blazed – Michael Wollny (Live at Schloss Elmau, ACT 9758-2). In the 1990’s, Kühn’s soulmate, friend, and long-time playing partner Ornette Coleman inspired him to rediscover in the other great Leipzig musician, Johann Sebastian Bach. And now with Out of the Desert he delivers convincing evidence that there are still many new words to add to the world language of music, even when one has to go to the desert to find them.