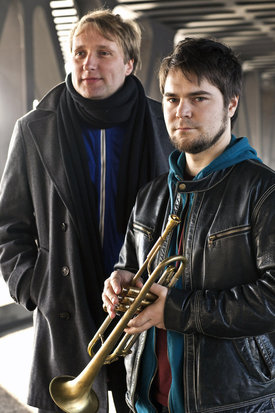 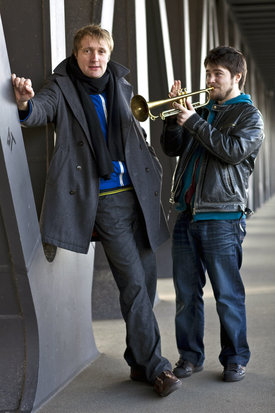 It’s the comeback of the year - after eight years, pianist Jens Thomas is presenting a new album on ACT, and a very unusual one at that: “Speed of Grace” – a tribute to the music of Australian hard rockers AC/DC, featuring not their typical loud rock, but rather music which is more reminiscent of intimate ballads. That the name Jens Thomas needs to be explained to young jazz fans also shows how short lived the jazz industry can be, as it was only a decade ago that this same Jens Thomas had one of the most rapid career ascents in German jazz history.

Born in 1970, Thomas grew up with rock music before discovering jazz and studied with Dieter Glawischnig at the Hamburg College of Music and Theatre. With his first group Triocolor, founded in 1993, he gained only minor recognition until his first solo album – “Endlich allein”, from 1999 – received a hymnal critique from Michael Naura, which in turn awakened the interest of ACT boss Siggi Loch. It was upon his suggestion that, together with Paolo Fresu and Antonello Salis, Thomas interpreted compositions by the great Ennio Morricone. He did this in such an astoundingly new and distinctive way that the album, 2000’s “You Can´t Keep A Good Cowboy Down”, was a resoundingly huge success, with each review better than the next. The album which followed one and a half years later with saxophonist Christof Lauer and guests, “Shadows In The Rain”, which reinterpreted songs by Sting, was even more successful. It was named “Album of the Year” throughout Europe – by France’s Jazzman, Britain’s Jazzwise and the annual German Record Critics’ Award in Germany. If you add the Thomas/Lauer “Pure Joy” duet from 2003 to this, still highly acclaimed even today, then Jens Thomas is, as Ulrich Olshausen wrote in the FAZ, “the only German jazz musician to win more awards and prizes than Albert Mangelsdorff” – and all this in just a little over three years.

Jens Thomas is able celebrate all this success precisely because of his uncompromising search for new paths and ever changing own viewpoint, and is not much bothered by external appearances. Musically he wanted to do something new, and the offer of working in the theatre – improvising on the grand piano for the Luk Perceval production of Othello at the Munich Kammerspielen – came at just the right time. Here something happened that “changed everything,” says Thomas today - he discovered his voice. “Like all pianists, I have always sung along in my head but the emotional force of the theatre work suddenly pushed my voice outwards to daylight and I knew that I couldn’t ignore this form of expression in the long term. In this way, singing became something very close to my heart and also corresponded to my yearning for fewer but very deeply and intensively experienced sounds.” Thomas developed his own singing style – which combines falsetto and overtone singing with powerful rock bass tones, and which is elaborated on several theatrical productions as well as the project “Goethe! Gesang der Geister” – all by himself.

As such, “Speed Of Grace” is strictly speaking a trio album: piano, vocals and trumpet on some tracks. From the outset, Thomas was in favour of a trumpet accompaniment on some of the AC/DC tracks. It didn’t take producer Siggi Loch long to convince him to get the wonderfully lyrical Finnish trumpeter Verneri Pohjola involved in the project. “We got to know each other and played for half an hour together until I stopped and said, ‘Let’s go to the studio straightaway!’ He can create a whole new world with just one sound and make his trumpet fully fuse with my voice. He always comes up with the right sound.”

Jens Thomas also came up with just the right sound for his not entirely risk-free, encounter with AC/DC. His versions go fully against the grain – hard rock becomes lyrical chamber music dimmed down to impressionist ballads which are fully improvised right down to their framework. Thomas explains how this came about, “My brother was a real AC/DC fan and I followed this for a long time. Then I lost sight of it for a while because the newer, typical heavy metal tracks didn’t really interest me – until I heard “It’s A Long Way To The Top” at a party three years ago. I was totally blown away by the intensity and almost shamanic energy. That gave me the idea to do this but in a totally different way. Of course it then took a long time and many experiments until I had made the songs my own.”

Thomas irrefutably managed this in the end: the rip roaring rock anthem “Highway To Hell” almost becomes a fragile, sad lament and the older rock numbers like “The Jack” are, to a certain extent, freed from any stylistic burden and given a totally new, minimalist form. This also shows that AC/DC’s music is often underestimated. “I approached it similar to Goethe texts. First I learnt them off by heart and then I gradually discovered, bit by bit, that there is perhaps more to them than Bon Scott thought - for example, the sadness and inner emptiness of those for whom the rock ‘n’ roll life becomes too much. The listener has a great deal to discover on “Speed Of Grace”. Welcome back Jens Thomas!