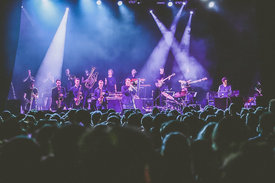 Jazzrausch Bigband is the latest group to join the ACT family of artists, and it stands out being as unique in several respects, in the first place for its size and versatility: it has more than 40 musicians as regular members. Jazzrausch plays an average of 120 concerts a year, which would clearly be impossible to achieve without this bench-strength. Within one year the ensemble has performed at Lincoln Center in New York, the JZ Festival in Shanghai, the Safaricom International Jazz Festival in Nairobi, the Ural Music Night in Yekaterinburg and the SXSW in Austin TX. There is probably no other jazz orchestra in the world which is quite as busy, in demand and successful as Jazzrausch. And there is also no other orchestra which reaches audiences as young as it does, notably people who had hitherto been very distant from jazz.

Jazzrausch Bigband’s ability to reach young audiences is attributable to its revolutionary new sound and repertoire. By playing acoustic techno-jazz in a big band format the ensemble has created a new style that delights jazz fans and excites dance addicts. This is music which can satisfy the longings of clubbers in search of the genuine, the hand-crafted and the original; and yet it appeals in equal measure to devotees of jazz and classical music by having more oomph, being brilliantly entertaining, and through its chunky sound. The German broadsheet FAZ talked about a mixture of "powerful sound, groove and enormous stage presence". For the time being at least, Jazzrausch Bigband has no imitators and essentially has the field to itself.

The band’s rapid rise in just five years of existence naturally has everything to do with its instigator and leader, trombonist Roman Sladek. This visionary musician who grafts round the clock had already realized when he was still a student that “the way in which jazz has developed has ended up destroying an awful lot. There’s a prevalent attitude of snobbishness and dismissiveness, combined with an absence of awareness of the audience. We jazz musicians have to find our way back into the here and now. We have to learn to master every form of music and demonstrate and proclaim that our music has massive creative potential." In other words. if people won't come out to jazz, then jazz has to go out to the people.

So he cast his net widely and took his ebullient enthusiasm to places that jazzers hadn't thought of before. And one place where he located a definite interest was the legendary Munich techno club "Harry Klein". Sladek asked his chief composer and arranger, guitarist Leonhard Kuhn, to write a programme that combined big band jazz and techno. And, as it turned out, the young audience was all over it. Jazzrausch Bigband became the only "artist in residence" big band in a techno club anywhere in the world, with a monthly date that still sells out every time. The good word started to do the rounds, and soon other clubs and festivals were keen to get hold of them and the band’s rise to its current heights began. Now the band has two ACT albums as its visiting card: there is a re-release of "Dancing Wittgenstein", the successful techno-jazz program, and also "Still! Still! Still!” a Christmas album in classic big band style.

"The Christmas programme was actually the first one we ever played," explains Sladek. "And we’ve enjoyed developing it further every year since. In the run-up to Christmas, it provides the perfect counterweight to the thrills of the techno shows that we do for the rest of the year." "Still!, Still!, Still!" consists of Leonhard Kuhn's multi-layered orchestrations for the band’s 18 musicians of twelve popular German Christmas songs, traversing the entire history of big band repertoire – and justifying those three exclamation marks in the album title. The opener is a Basie-style swinger "Leise rieselt der Schnee" with extremes of soft and loud; “Engel auf den Feldern singen” (Shepherds in the Field Abiding) receives a brisk Herb Alpert treatment; "Fröhliche Weihnacht überall" has the characteristic Stan Kenton sound.

“These tunes,” says Sladek, “are to our Christmas programme what the rhythms are to our techno programme. The beauty of "Still!, Still!, Still!" is that everyone knows the songs. So we and the audience have a common starting-point musically from which we can inspire people who seldom hear jazz to really enjoy it." In fact, this idea gets to the heart of the Jazzrausch Bigband phenomenon: for a long time, this group has been working in "jazz", which more than ever today is the category for interesting and worthwhile music that doesn't fit into any other category. Jazzrausch Bigband keeps the music fresh and on the boil. It doesn’t merely demolish musical barriers, it has a joyful focus on one thing above all: that musicians and audience alike can have fun.