A tribute to the Jazz-Baroness 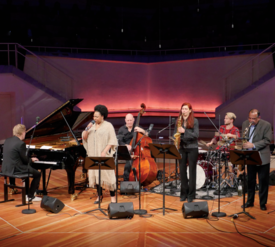 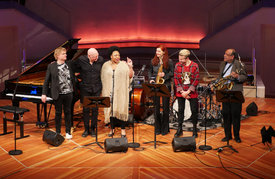 A single moment can change a life forever. That happened to the Jewish baroness and heiress Pannonica (Nica) de Koenigswarter (1913-1988), née Rothschild. On hearing Thelonious Monk’s ‘Round Midnight’ on a trip to New York at the beginning of the 1950s, she was so totally captivated by the music, she turned her back on her native Europe and on all the glamour of her previous existence, and became one of the great supporters of American jazz.

Siggi Loch experienced a similarly decisive moment in his life when, at the age of just 15, he heard a concert by Sidney Bechet and decided that his life from then on would be dedicated to jazz. This decision had a profound effect not just on him, but also on the way this music has developed in Europe, most notably in the years since he founded ACT in 1992.

So it was above all a feeling of affinity with Pannonica which inspired Siggi Loch to dedicate an entire evening to her in the “Jazz at Berlin Philharmonic” concert series which he has curated since 2012. The concert, on 6 February 2019, thirty years after her death, focused on pieces by the musicians whom the “Jazz Baroness” supported over many years with money, accommodation, advice and friendship, and who often dedicated compositions to her to express their gratitude: Thelonious Monk, Horace Silver, Bud Powell and Sonny Rollins.

Musicians from five countries took part in the concert: Finnish pianist Iiro Rantala, a habitual unifier of the traditional and the modern, was directing. Alongside Swedish bassist Dan Berglund and Norwegian-born drummer Anton Eger, he formed the musical foundation. In addition, there were three outstanding soloists: American saxophonist Ernie Watts, who shared the stage with Thelonious Monk back in the pianist’s lifetime, German saxophonist Angelika Niescier and New York singer Charenée Wade. Together they do not only demonstrate magnificently that a single moment can indeed transform an individual life story, but also that such occurrences have the power to shine beyond the confines of continents, cultures and epochs.