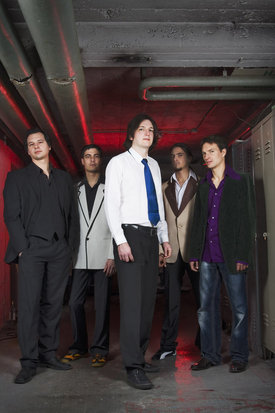 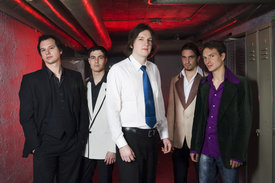 YOUNG GERMAN JAZZ - new additions to the family
In 2005 ACT began the Young German Jazz series as a forum for the young and extremely energetic German jazz scene. With the first release of the [em] Wollny / Kruse / Schaefer trio, the idea was immediately greeted with a strong national and international response. The YGJ concept of nurturing and promoting young talented up-and-coming German musicians and giving them a fair chance on the international scene had caught on.
In 2008 ACT will be treading on another Young German Jazz borderline. The motto: crossing frontiers. As with many of his young colleagues, Chris Gall has had his own personal affair with rock and pop music – they are as much a source of inspiration for him as the Great American Song Book. And you can tell simply by its name that the band Panzerballett has a casual attitude towards its own history, an attitude that is reflected in how they approach the various musical genres. They both effortlessly transcend supposedly insurmountable barriers and transform that art form called jazz into something that is once again sexy and exciting – also for a young audience!
PANZERBALLETT – STARKE STÜCKE
Offhand it seems foolish to combine, of all things, jazz and heavy metal. But 30-year old Jan Zehrfeld, the compositional mastermind of Panzerballett, belongs to the generation of musicians now forcing themselves into the spotlight who grew up breathing in more than one musical style. As a kid he was already into hard rock, just as the world of jazz was also something particularly special to him. This dualism is mirrored in a career in which he started off as a cellist, then switched to concentrate on guitar: Zehrfeld dutifully studied jazz guitar in Graz, Helsinki, and Munich, then passed through the stages virtually every talented young jazz musician travels, from Peter Herbolzheimer’s National Youth Jazz Orchestra on through to Klaus Doldinger’s Passport. When pianist Martin Schmitt was working for the first time on a larger orchestration for an homage to Ray Charles, Zehrfeld wrote the arrangements. Recently, Zehrfeld has been working with the Hilliard Ensemble on adaptations of Estonian composer Arvo Pärt’s music.
Parallel to all this, as a true electric guitarist Jan Zehrfeld digs it when the music comes across loud and hard. When he’s playing with the Munich quartet SLID, Zehrfeld prefers the more progressive, odd-meter variation of speed metal combined with hardcore, "speedcore"; its screaming riffs and dark sounds race in the direction of such groups as Slayer and Exodus. Considering the musical conjunction of brutal heaviness and complexity to be thrilling, he joined Schizofrantik, an experimental metal band playing "zappaesque" compositions; or LIND, a studio project blending hardcore with electronica and traces of jazz fusion. At the same time, his urge for freedom of improvising led him to interesting cooperations with several bands, whose music incorporated such elements at different grades: Eternal Quest (funkjazz), bobbycar (jazz/drum&bass), bastian (indiejazz), Oscar Kraus & die Bedrohung (crossover-pop) or Earforce (funk/fusion). The combination of jazz-inspired improvisation with headbanging heaviness and ingenious intricacy are musical combinations that, at least in Germany, are seldom heard; over the nearly four years of its existence, Panzerballett has attempted to “combine the floating suppleness of ballet with the crash-bang power of a tank,” as Zehrfeld phrased it.
But in order to interlock the brachial riffs and driving grooves with complex solos and winding, edgy rhythms it is necessary to have like-minded virtuoso players on every instrument. Panzerballett had already shown they were well on their way with their self-titled debut album two years ago. For instance, bassist Florian Schmidt had learned to deal with pressure and tempo through his work with Pee Wee Ellis. And with his band Earforce, saxophonist Gregor Bürger has become conspicuous as someone who is brilliant at breaking down barriers. In the meantime, the band has added a second guitarist, Andreas Dombert, and drummer Sebastian Lanser – a colleague from Bürger’s days at the Linz conservatory in Austria – has tumbled into the mix. This gives Panzerballet the ability to expand and shift into an even harder drive.
For his ACT debut, STARKE STÜCKE (a play on words which means “Heavy Pieces” or “Strong Stuff”), Zehrfeld concentrated on Siggi Loch’s incitement that he tackle not only his own original compositions, but take a risk by adding both rock and jazz standards to the mix for the first time. So we get Henry Mancini’s “Pink Panther”, the Deep Purple hit “Smoke On The Water”, “Thunderstruck” from AC/DC or „Paranoid“ of the heavy metal band Black Sabbath. Joe Zawinul’s “Birdland” is artfully dismembered and then reassembled into something completely new. Zehrfeld performs the same operation with the Scorpions’ “Wind of Change”. He comments: “For me it was a snap decision. So that we could all the more mercilessly tear them apart, I chose really well-known pieces. It’s more exciting for us as well as the listener.”
Not only stylistically, but also personally, STARKE STÜCKE is filled with fascinating, iridescent, occasionally humorous combinations. The impressive guest list of players on this new sound pallet includes guitarists Peter O’Mara, Nguyên Lê, and Ulf Wakenius, saxophonist Alexander von Hagke, keyboard player Jan Vacik, Andy Lind, Naomi Isaacs, and singer Conny Kreitmeier, who not only has a successful career belting out rock songs – she has also received the German “Kleinkunst” prize. More than ever, the motto “head banging with brains” holds true for this Panzerballett.