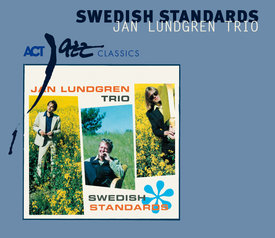 Pianist Jan Lundgren has always been good for a surprise, beginning with his decision to opt for a career playing the piano – at the time he was considered to be one of Sweden’s most promising young tennis prospects. Lundgren was already aged twenty and had spent years aiming towards a career in classical music before he more or less accidentally discovered his love of jazz; he methodically re-shaped his studies at the renowned College of Music in Malmö, and then began his first forays as a professional musician. He immersed himself in the Great American Songbook, as scarcely any other European players before him had done so. The influence of piano greats ranging from Erroll Garner and Bill Evans on through to Oscar Peterson and Bud Powell can be heard on Lundgren’s first albums, which came out in rapid succession between 1994 and 1996.

It was even more surprising when in 1997 Lundgren came out with his CD Swedish Standards, an incredibly atmospheric and tasteful reworking of the rich Swedish folklore tradition – and this was long before many other jazz musicians followed the paradigm shift towards world-music, discovering along the way their own native folk music roots. The album was a sensational success in Sweden; it received a whole slew of awards (among them “Best Jazz CD Of The Year”), and even stormed its way up the pop charts.

But its status as a milestone in the history of Swedish jazz is only one reason why ACT is re-issuing Swedish Standards (ACT 9022-2). Another is that the album partly documents the beginning of Lundgren’s fascinating musical journey that includes the Mediterranean world of sound – with Paolo Fresu and Richard Galliano on Mare Nostrum (ACT 9466-2), and a trip back to the music of the Renaissance – Magnum Mysterium (ACT 9457-2). Most importantly, it is the jumping off point for Lundgren’s newest work that – how could it be otherwise – is poised to spring some more surprises.

European Standards represents the logical next step, a trip through ten European countries, from the German-speaking to the Romanic language countries on through to the Slavic lands. Each one is represented by a “typical” song from that country’s tradition, some very popular, others virtually unknown. Now they are no longer typical just in terms of folk music, but also almost in the sense of a historical mindset. For instance, Austria is represented by a classic Viennese song („Wien, Du Stadt Meiner Träume“). Alongside Kurt Weill’s “September Song”, which he wrote after his move to America, Germany is represented by the idiosyncratic German electronic pop pioneer Kraftwerk and their “Computer Liebe”.

With Michel Legrand’s „Le Moulin De Mon Cœur“ and Francis Lai’s „Un Homme Et Une Femme“ one instantly thinks of France, just as with the Beatles’ song “Here, There And Everywhere”, the reflection is of Great Britain. By contrast, the title track from Roman Polanski’s “Rosemary’s Baby” is an off-beat choice. Yet even this Hollywood movie music quickly leads one to its land of origin. Lundgren explains that, “the composer Kzysztof Komeda is Polish, and I think that his background inevitably shows up in the music”.

At any rate, Lundgren didn’t make it easy for himself on European Standards. Lundgren recounts that, “we listened to and researched an incredible amount of music. We already had some of the songs in mind, but we were totally unfamiliar with others before we started the project. The Swiss song ‘Stets I Truure’ was recommended to us by a friend. It was the same with the Spanish song ‘Yo Vivo Enamorao’.” It was both logical and courageous for Lundgren to chose an Esbjörn Svensson composition to represent his Swedish homeland. As a concluding piano solo, „Pavane – Thoughts Of A Septuagenarian“ is a gripping homage to his friend and colleague who recently so tragically died.

It is not just the convincing and surprising repertoire that makes this project stand out from other similar set ups; above all it is Lundgren’s amazing ability to masterfully shape the original material – material that couldn’t be more diverse – into a homogeneous, perfectly flowing, coherent album. Over the years his personal style has become unmistakeable, an economical, feather-light, and yet thematically expansive way of playing that reshapes the various constituent elements in a ingeniously original manner. He is ideally complimented here by the likewise lyrically grounded, constantly driving rhythmic play of his two companions, Mattias Svensson on bass and Zoltan Csörsz Jr. on drums.

Why didn’t Lundgren once again assemble a European all-star group as he had with Mare Nostrum? He explains that “this is a band project. We spent many many hours together fine-tuning, rehearsing, and playing”. His friend from his student days, Mattias Svensson, who had already recorded several albums with Lundgren, was clearly the right choice. Just as was 32-year-old Csörsz, who likewise studied at Sweden’s Malmö Academy of Music. Csörsz was a child prodigy in his former Hungarian homeland, and thanks to his musical flexibility and class (as member of the popular progressive rock band “Flower Kings, for instance), he is one of Scandinavia’s most sought-after drummers.

The trio is so perfectly attuned that the listener (and perhaps this is the biggest possible compliment for such a project) does not hear how difficult it was to put this music together. At any rate, Jan Lundgren has once again come up with an especially enjoyable album. But then coming from him, perhaps this isn’t much of a surprise.