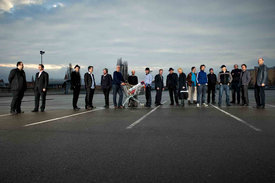 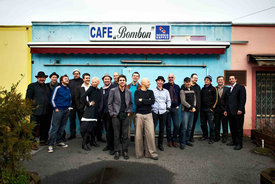 All compositions by Horst-Michael Schaffer and Heinrich von Kalnein

There were times when big bands were a defining part of our society’s musical cultural scene. Today only a few jazz big bands exist, and it appears the reasons for this change are not artistic, but rather financial. In Germany public radio stations are responsible for the funding of big bands, and in France the Orchestre National de Jazz sets the standard. Meanwhile in Austria, one ensemble has shown above all others that orchestral concepts are far from exhausted: the JBBG - Jazz Bigband Graz.

Finding audience appeal and new ways to attract listeners is the motto of the JBBG bandleader saxophonist Heinrich von Kalnein and trumpeter Horst-Michael Schaffer. They have won acclaim for their concept of not sticking to the traditional scheme of orchestral and solo passages, but rather creating a clear ensemble sound, which is strongly influenced by electronic music and fuses laptop and drum ‘n’ bass aesthetics. The JBBG have also been noticed outside jazz circles - laut.de, which is a German online portal for mainly pop and rock music, called them “an earthquake in the big band scene”.

The six multi-layered pieces on “Urban Folktales” form a complex work of art that aims to set the benchmark in the international field of orchestral jazz in terms of conceptual clarity and stylistic variety. Sometimes meditative, sometimes swinging and sometimes grooving and rocking, the fusion of Western with Eastern harmonic traditions, influences from Austrian folk music, urban sounds, African music and some futuristic spherical sounds - as well as combining all of this in one place, JBBG gathers together some of the best Austrian, Swiss and German jazz musicians.

On “Rêve Africain” we hear the impressive voice of Hadja Kouyaté from Guinea, who sounds like an African Mahalia Jackson. The Finnish trumpeter Verneri Pohjola sets his unmistakably mark on “Seelenbaumeln” and Italian trombonist Gianluca Petrella is responsible for the tension on "High Voltage". Nguyên Lê, the French guitarist of Vietnamese origin, enriches three pieces with the unique sound of his electric guitar.

From “Jazzpaña” with the WDR Big Band and the Jazz-Symphonie “Europeana”, to Ensemble Denada from Norway and the Swedish Bohuslän Bigband with its artistic director Nils Landgren; with “Urban Folktales”, the JBBG becomes yet another successful part of the long ACT tradition of outstanding and award-winning big band releases.