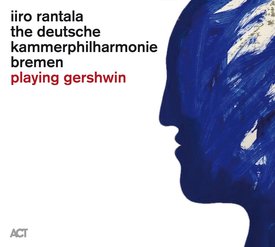 Iiro Rantala is "a natural phenomenon on keys" (German jazz magazine Jazzthing); an all-rounder of whom New York-based pianist and arranger Gil Goldstein quite rightly said: "Iiro Rantala is a pianistic sensation who makes the strongest case I know to believe in reincarnation, because his pianistic technique and musical sensitivity speak of depths that appear impossible to have been achieved in this lifetime alone". Up to now, Rantala was mainly associated with the trio Töykeät, one of the weirdest, funniest and most visionary piano trios in international jazz. He sounded out all the possibilities of this formation: Sometimes playing the energetic lion on keys, sometimes the sensitive romantic or the burlesque clown. His playing blasted away all stylistic boundaries and was as uncompromised as it was entertaining, but kept together by a magical triangle: his boundless technical ability and his unmistakeable senses of humour and style. Rantala preserved his unique skills for his solo career when Töykeät broke up in 2006 after playing together for 18 years. His solo career kicked off with his 2011 ACT debut "Lost Heroes". It represents his very personal homage to all the outstanding musicians in history he is inspired by. Alongside with famous jazz musicians like Esbjörn Svensson, Oscar Peterson, Bill Evans or Jaco Pastorius, he also dedicates tunes to opera singer Luciano Pavarotti or composer Jean Sibelius. Rantala avoids every sentimentality in favour of a real act of admiration and completely remains himself: One of the most competent pianists in Scandinavian jazz. The album was celebrated as on the best piano solo recordings in recent times. German newspaper "Süddeutsche Zeitung" even called it a "masterpiece". The album also won the prestigious German Critic's award as "Jazz album of the year 2011". In June 2012 Rantala received the ECHO Jazz (German Grammy) for Best International Pianist. Rantala's new album "My History of Jazz" present his very personal view of jazz history and the role of the piano in it. The album was recorded with Lars Danielsson (bass), Morten Lund (drums) and Adam Baldych (violin).

The time of rigid demarcations between musical genres is over. For those who see music, indeed who love music as a universal language offering unlimited scope for human expression, this can only be a positive development. When one considers the jazz pianists of our time, they have just about all received their grounding in classical music, and yet these are musicians who don’t just traverse many different jazz styles, they can also roam at will into other genres. And looking among them, it would be hard to find a pianist as quintessentially complete as Iiro Rantala from Finland.

The 49-year-old, who first studied jazz piano at Finland`s reknown Sibelius Academy in Helsinki, and then classical piano at the Manhattan School of Music in New York, has always shown a tendency to regard the entire history of music as a treasure trove which can supply material for his own very personal creations. Right from his first solo album "Lost Heroes" he was paying tribute not only to jazz legends but also to opera singer Luciano Pavarotti. His album "My History Of Jazz", released shortly thereafter in 2012, begins with Johann Sebastian Bach, and with every justification. One aspect of Rantala's activity which has been consistent, alongside his succession of wide-ranging and surprising projects – such as his John Lennon homage, or his cycle of the seasons, "My Finnish Calendar", or his first opera "Sanatorio Express" premiered in 2018 – is his regular work with classical orchestras. Since 2017, Rantala has had a particularly fruitful cooperation with The Deutsche Kammerphilharmonie Bremen, one of the world's leading chamber orchestras, a group which inspires audiences all over the world with its unique way of making music. The award-winning ensemble's preference for crossover projects is also one of its distinguishing traits, which means that Rantala and Deutsche Kammerphilharmonie Bremen are definitely on the same musical wavelength.

Their first performance together was at the Gala Concert for Jazzahead in Bremen. "From the very first note, I fell in love with their sound, their energy and their musicality," says Rantala. They played Mozart’s C major Piano Concerto K. 467. The audience of industry specialists from all over the world loved it, and the result was the album "Mozart, Bernstein, Lennon", which was promptly nominated for an International Classical Music Award. This successful collaboration has led to a further album which is now available, "Playing Gershwin". It is a logical continuation, since with George Gershwin it takes us to the composer whose work represents a confluence of modern classical music and jazz. And at the same time it leads us into the period of the 1920s and 1930s, when, in Gerswin’s hands at least, genre boundaries were as fluid as they are today. Further proof of this fluidity between genres is that the audience for the the world premiere of "Rhapsody in Blue"in 1924 by Gershwin and the Paul Whiteman Band at New York's Aeolian Hall included violin virtuosi Heifetz and Kreisler, classical composers Rachmaninov and Stravinsky, and the conductor Leopold Stokowski.

The album begins with "Rhapsody in Blue". This is a performance with a particular freshness about it, not least because Rantala takes the fully through-composed piece and allows himself a few freedoms with it. For example, he inserts an improvisation based on a Cuban montuno into the final cadenza. Equally thrilling are the 16 minutes in which Rantala and The Deutsche Kammerphilharmonie Bremen conducted by Jonathan Bloxham take us through the story of Gerswin's "Porgy and Bess" – with Heifetz's five-part suite for piano and violin derived from the opera as their point of departure. The fascinating interplay of keyboard and stringed instrument has also shaped Oliver Groenewald's orchestral arrangement in which we hear Gershwin’s fabulous tunes, from "Summertime" to "It Ain't Necessarily So".

And there’s more. Strictly speaking, the album should be called "Playing Gershwin and Rantala", because there are also five shorter pieces by the Finnish pianist himself. These are tunes from earlier albums by the pianist, in which he references classical musicians or styles. "What Comes Up, Must Come Down", for example, is a take on Franz Liszt’s romantic piano virtuosity, and this orchestral version brings glorious technicolor to it. "Anyone With A Heart" is Rantala’s personal bow to Mozart. "Hard Score" is like a movie theme, drawing inspiration from Arabic and world music. And, of course, the tango - which is also heard in the previous pieces – is unavoidable. In his youth in Tango-mad Finland, Rantala was more or less inhaling it every day, and playing it on countless gigs: "A Concert Tango" is not so reminiscent of Argentinian tango, but rather the more robust classical tango that is incredibly popular in Finland.

As it does in the Gershwin works, the complex interplay which Rantala sets up with the orchestra also works very well here. "I think like a classical musician. I want to play good pieces, good tunes. Not just riffs," he says. Of course, he always does this in the jazz spirit, in the spirit of musical freedom. Which, as ever, is what makes Iiro Rantala such a “natural phenomenon at the piano” (Jazzthing).