Iiro Rantala
how long is now? 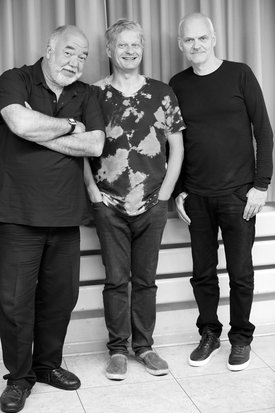 "Avoid the basic concept of the jazz piano trio and make it more groovy, with simple melodies” Iiro Rantala

After the album “My Working Class Hero,” dedicated to John Lennon and “Tears for Esbjörn,” a homage to the influential Swedish pianist, “How Long Is Now?” puts the spotlight fairly and squarely back on to the Finnish pianist, composer and life-force Iiro Rantala. This new trio album with Peter Erskine (drums) and Lars Danielsson (bass) constitutes a many-faceted summing-up of a happy and resoundingly creative phase of Rantala’s life.

Rantala says of the new album: “I think this is one of those ‘composition is the king’ kind of projects. The theme, the writing, the mood of the composition are the most important things.” Seven of the thirteen compositions here are by Rantala himself, three tracks by the other players in the trio, and three more are by others who, in their different ways, have helped to construct Rantala’s appealing musical personality.

Rantala has described clearly what he wants to do as a composer: to write “simple melodies that people can remember,” and there are several fine examples with catchy hooks on this album. For example, Rantala has set out to capture the contrasting personalities of each of his two young sons, and convey the evident delight they both bring their father. Rantala describes them: “Bruno likes simple things in life. Sleeping and eating. So the tune is simple. Only 3 chords: G, am7 and D7.” And what about his brother Topi? “Topi is more bossy, there is more edge and drama with him. So, the tune is in the minor and has some more of a feeling of danger.” Perhaps that danger might be found in rock arenas, because “Topi” has inspired a riotously flamboyant Little Richard-style piano solo from Rantala, and Danielsson plays an arco solo which sounds uncannily like a wailing rock guitar. There is also joy in lively, buoyant tunes such as “A Nut” and “Snapchat.”

The guest composers on the album are certainly an eclectic bunch: Jimi Hendrix, Kenny Barron and Johann Sebastian Bach. Hendrix’s “Little Wing” is a reminder that Rantala has very strong roots well outside the jazz tradition. When he is asked to name his musical influences, the first name Rantala comes up with (before those of Egberto Gismonti, Keith Jarrett and Michel Petrucciani), is Richard Tee, a presence on a vast quantity of R&B records from the 1970s onwards, and a seminal 'pop' piano influence through his gospel background. And what inspires Rantala’s take on Kenny Barron’s ‘Voyage?’ “It’s a mixture of Finnish Tango and...well...Voyage,” he says. And Bach, the “Kyrie” from the B minor mass? For Rantala this tune is a memory of a formative childhood moment: “I started my life in music singing Bach at age of seven in a boys choir.”

Rantala’s compositional horizons are mostly what defines “How Long Is Now?”, but he also has a conscious intention to take a jazz trio in a specific direction: “The basic concept,” he says, “is to avoid the basic concept of the jazz piano trio and to make it more groovy, with simple melodies.”

For “How Long Is Now?” Rantala extended the invitation to one of the great drummers of our time, Peter Erskine. Rantala was thrilled to have the opportunity in June 2015 to do just two concerts and this recording with Peter Erskine: "I love Peter Erskine's playing," he enthuses. "I grew up listening to him. Steps Ahead, Weather Report and particularly Word of Mouth." The collaboration and the juxtaposition of Rantala and Erskine are fascinating to witness, particularly with the astonishing close-up clarity and sound quality that engineer Adrian von Ripka has achieved in the Bauer Studio in Ludwigsburg. Rantala is a far more rhythmically assertive player than the pianists with whom Erskine has had the strongest associations in the past, such as Alan Pasqua and the late John Taylor.

Perhaps the best example the Erskine’s genius in this context is “A Nut,” where he responds to Rantala’s up-front challenges with a seemingly inexhaustible creative well-spring of rhythmic and tonal variety. The results are dazzling. Perhaps the best tribute that can be paid to Erskine’s playing right through the album is to quote Erskine himself describing what he always admired in Elvin Jones: "pure emotional expression and velocity, and being in tune or somehow plugged into a higher awareness of things."

The bassist of the trio is another consummate musician, Lars Danielsson, whose playing is consistently both subtle and authoritative. He has brought two compositions to the record. “Choral” is a short evocation of a winter morning. “Taksim By Night” presents a confluence of Eastern music and European classical tradition that Danielsson encountered personally when playing in the square in Istanbul, and which left an indelible impression.

A feature present throughout the album – and which was apparently much in evidence at the sessions too - is Iiro Rantala’s winning sense of humour. He recently told an interviewer on video: “We Scandinavians like minor and sadness... and pessimism and darkness.” But as he spoke all of those words, he never allowed a characteristically mischievous and ironic smile to slip from his face, even for a moment. In “How Long Is Now?” Rantala, Erskine and Danielsson have produced a thoroughly life-affirming album.